​The Frog Prince is an adaptation of Grimms' fairy tale which is also known as The Frog King or Iron Henry. George Rutledge and sons published a picture book with illustrations by Walter Crane (he also adapted the story and complete design of the book) in 1874. In different forms, it was reprinted many times and today it's considered a classic and a collectible item. 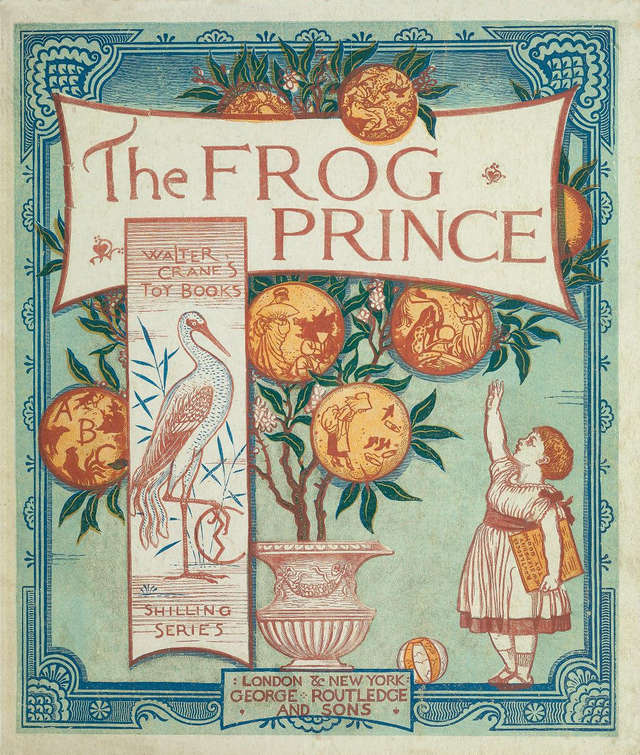 The cover is decorated with one of characteristic Crane's frames and numerous details. There's a title and a sign "Walter Crane's Toy Books". We can recognize several different scenes from different books in the series in stylized golden balls (one is used as an initiator in the story about the frog prince). Only two colors are present - brown in green, both in several shades, skillfully creating an illusion of full-color printing.
​
The story starts with an introductory scene. The princess has a golden ball, a precious toy which looks more important than any friend. When it drops in the pond, she is desperate. The golden ball is a sign of her high status but her play suggests immaturity and irresponsibility. She is a princess by birth yet her actions don't reflect that. 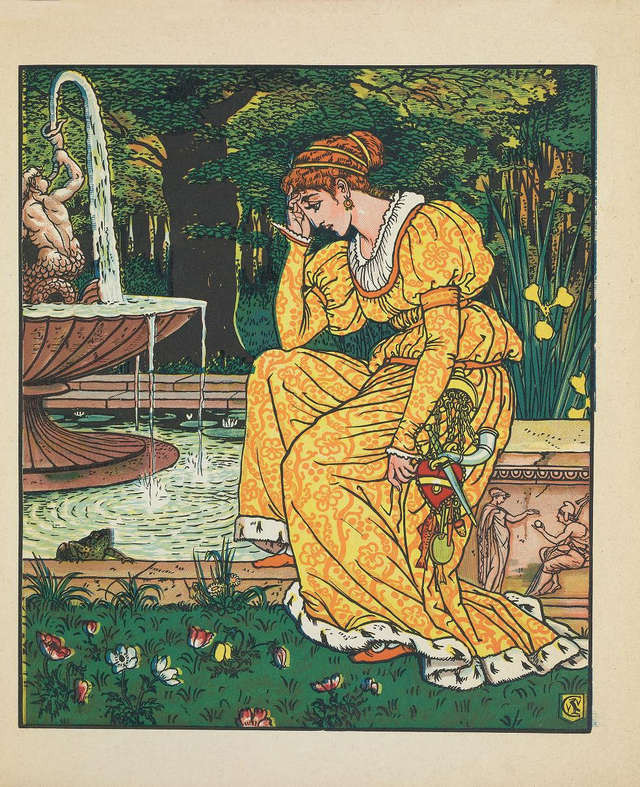 She can't get the ball and she seems helpless. Then a frog shows and proposes her a deal. He'll get her a ball if she will take him for a companion. She will have to share her food, her toys, and even her bed with a frog. The princess doesn't think too long. Actually, she doesn't think at all. She just wants her golden ball back and she is willing to promise anything.

When the frog returns from the pond with the ball she take sit back and runs away. Her part of the deal is forgotten. Well, forgotten by her, not by the frog.

​While the princess and the frog dominate the illustration we can't overlook the flowers or especially the details on the fountain, all part of the Crane's vision of ideal illustration for a picture book. Even his signature in the right corner is a miniature piece of art. 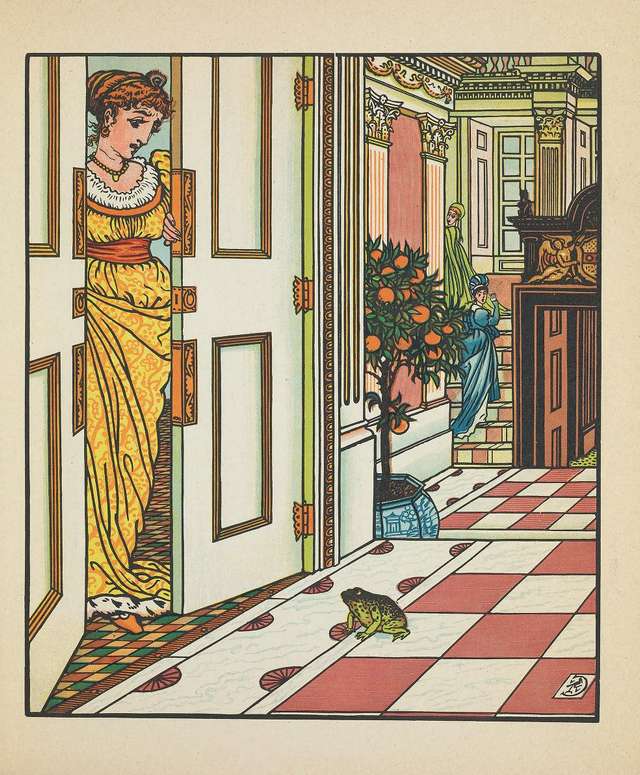 So the frog follows her to the castle. He knocks at the door and demands to talk with the princess. Reluctantly, she talks to him but doesn't intend to keep her word. When the king hears what happened and what she promised, he demands from her to fulfill the promise. She is of royal origin. Her word is almost sacred. She must keep it!

​Again, Crane's attention to details is almost unbelievable. The pattern on the floor is a masterpiece itself. He didn't only include a decorative vase but he added decor to the vase too. His signature is different - another lovely addition to a colorful and carefully constructed composition on the picture. 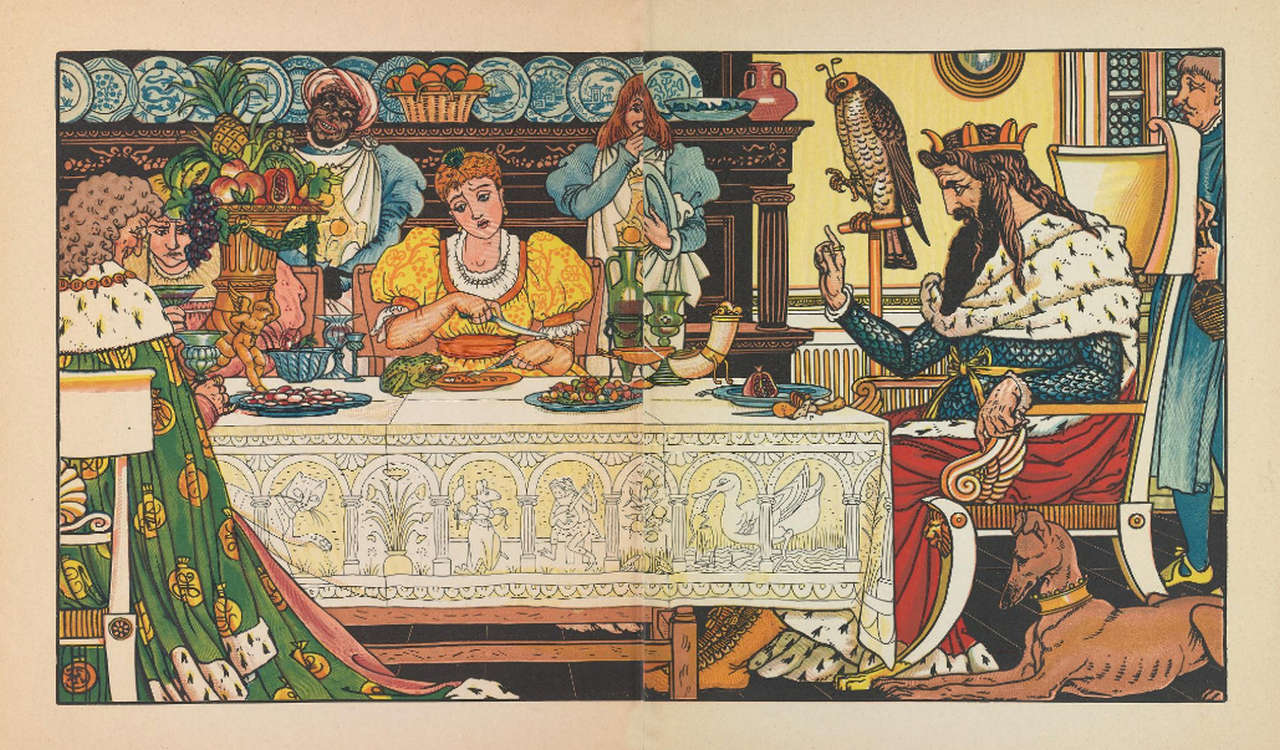 The scene at the king's table is quite comical. The frog must get on the table to be able to eat from the princess' plate. She tries to ignore him as it's possible to ignore a frog who is eating from your plate being surrounded by courtiers. The king is at the head of the table. He isn't visibly interfering yet it's obvious he controls the situation. Frog is in an unpleasant situation but he doesn't want to back down. He did his part of the job, so he deserves to get paid.

The princess impatiently waits for him to finish his meal. When this happens, he demands the next part of the payment - he wants to get into her room. The kings support him and the princess must obey.

​Please note almost countless details in the illustration. While Crane firmly believed in the stylized illustration which is even more appropriate for the audience (kids) if it's not too realistic, he also understood how important was for kids to have an option to explore all the tiny details, sometimes only after the fifth, the sixth, or later reading. The plates in the background (on the cabinet) and illustrated scenes from fables on the tablecloth are fine examples of Crane's methodic approach. 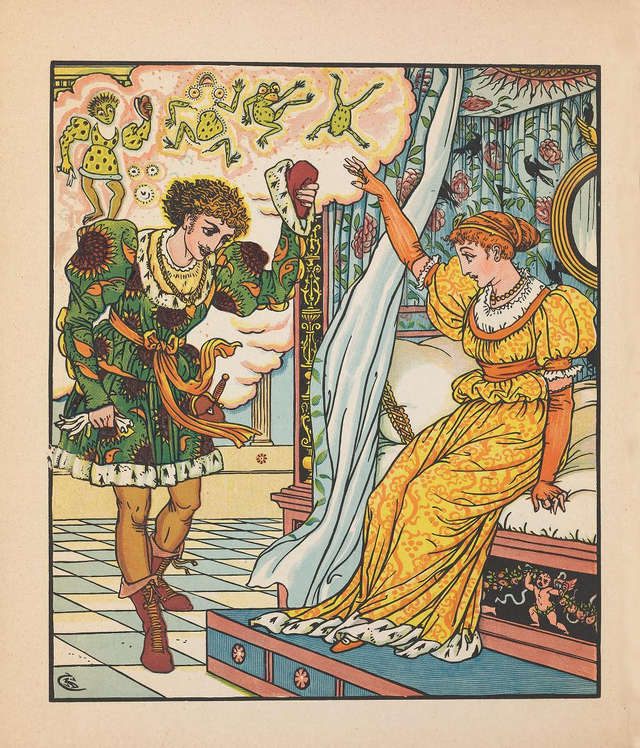 This picture is called The introduction of the prince. Princess had enough of frog's intrusiveness and throws him at the wall. In earlier versions, they sleep together but Brothers Grimm weren't fond of this kind of allusion on premarital activities, so they rewrote the ending of the tale. When the princess throws the frog, he changes into a prince. (There are also versions where she beheads him!)

This metamorphosis is shown in kind of comic sequence in the cloud under the prince's head. He looks happy with the change and she looks happy as well. Now, when the repulsion caused by her suitor's look is beaten, they can become a husband and a wife. It's not hard to find other fairy tales where the wife can't accept her husband at first but becomes very much in love with him later. Think just about The Beauty and the Beast!

​Crane stayed faithful to his beliefs decorating seemingly less important elements with numerous symbols of love: a cupid on the bed, birds, and flowers on the curtain, a heart on the neckless around his neck, ... 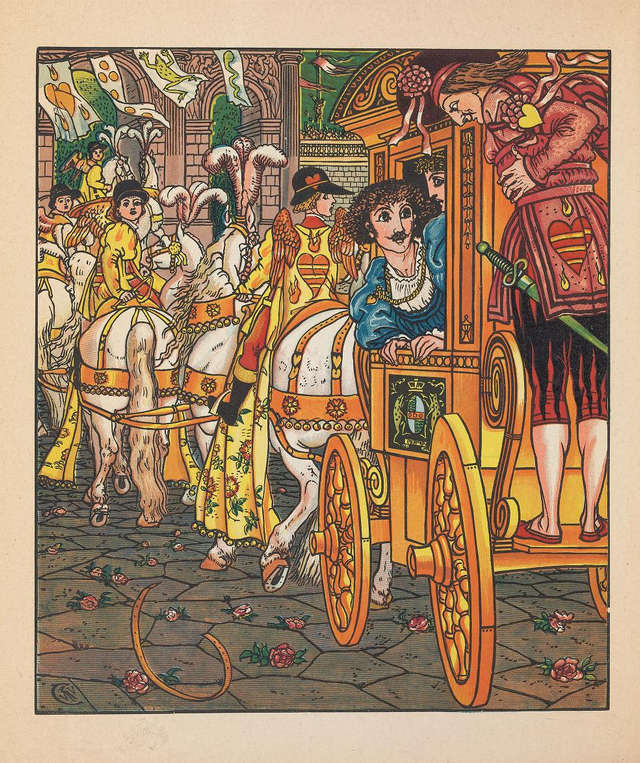 The prince and the princess are leaving her castle. She is grown up now and she can (and is expected to) start leaving without constant protection of her authoritative father. She is parting in a carriage, a well-known symbol of romance and self-realization. Brothers Grimm also included iron to show the strength and honor belonging to the prince's servant what is easily translated to his master's high value.

Crane added even more symbols - a frog for transformation, a heart for love and the roses which can mean many things but are in this case easily connected to appreciation, desire, and passion.

These Crane's picture book perfectly illustrates how much can an illustrator add to already multilayered classic work of children's literature. On the premises, of course, he is properly talented and educated.

If you want to see the perception of other illustrators from different times and environments, don't miss checking this page: