Vintage Illustrators
Grimm's Fairy Tales, Stories and Tales of Elves, Goblins, and Fairies by Brothers Grimm with many illustrations and decorations by Louis Rhead was published by Books Inc., New York by arrangement with Harper & Brothers, New York in 1917.

It's a pretty hefty book with more than four hundred pages and more over one hundred illustrations done in pen and ink (only the frontispiece is colored). It brings a short biographical note on Jacob and William Grimm, a preface and sixty-seven fairy tales. This means less than third stories from the original collection is here, but we can find all the major ones and many which are already forgotten today.

We will present the book with short summaries and illustrations of all stories. It's a huge and very time consuming goal, so be patient - stuff won't published all at once. If you find this post interesting, don't hesitate sharing it with your friends, especially ones who are interested in vintage art, history of fairy tales, and literature for children. 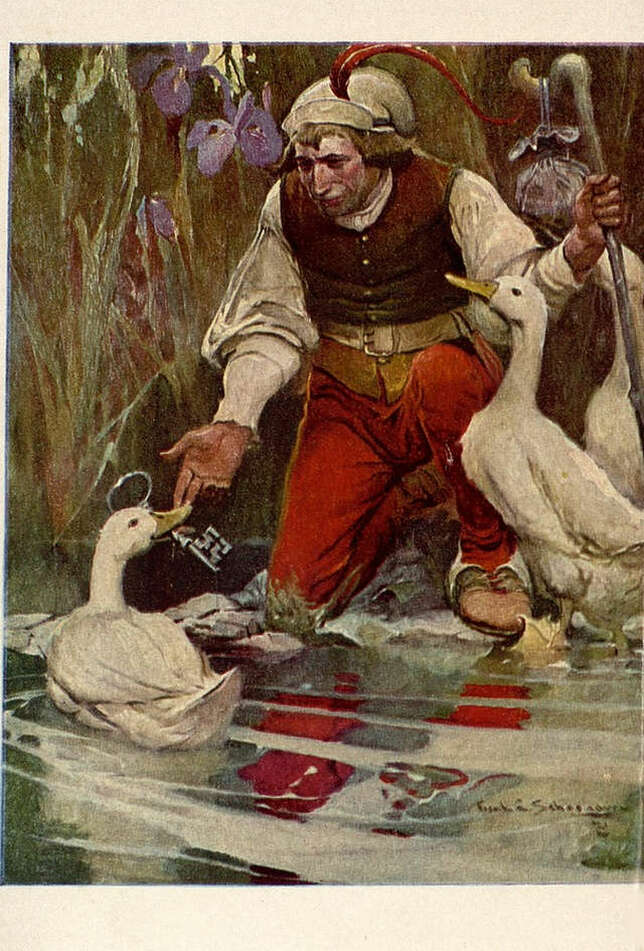 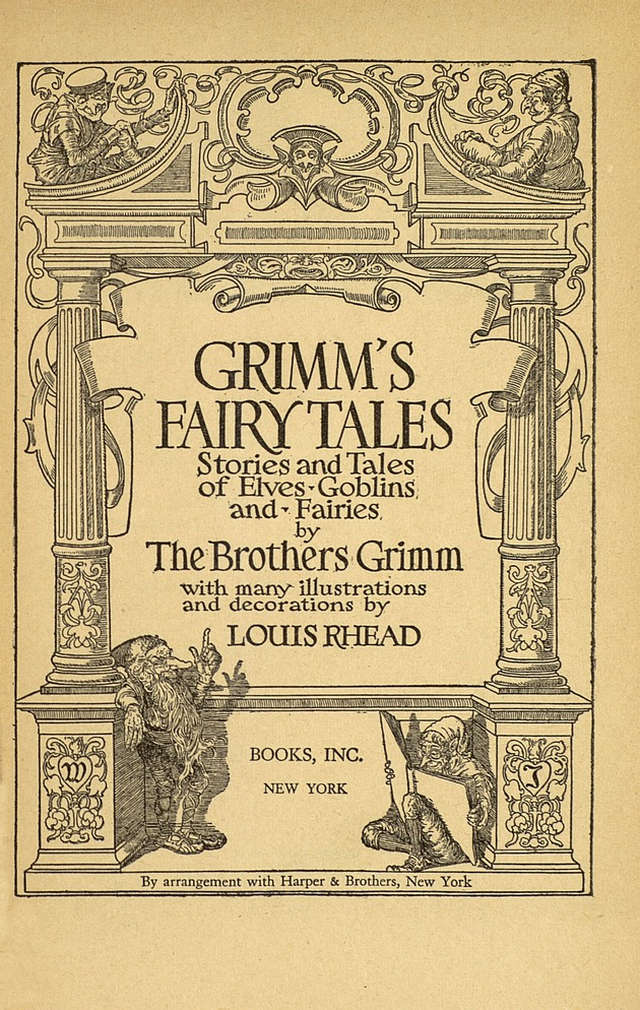 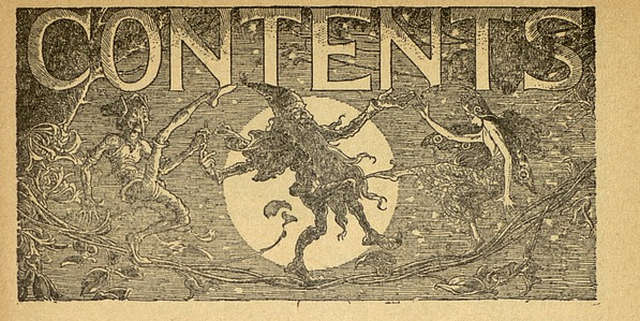 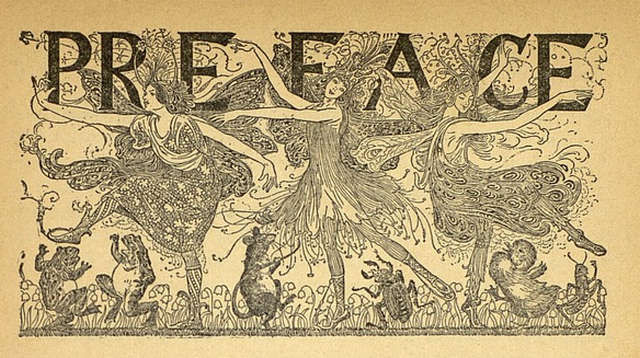 One of the most popular fairy tales ever. A girl leaves her home to visit a sick grand mother in the woods. She meets a wolf on the way, he tricks her, eats her granny and herself but then the hunter comes. He rescues both and the wolf dies.
In this version the story continues. When Little Red Ridinhood a few days later met another wolf, she locked herself and the grand mother in the house. The beast still tried to break in but the girls killed him! 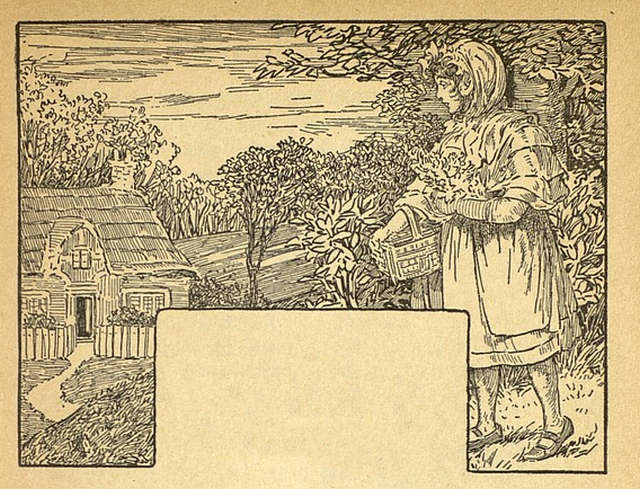 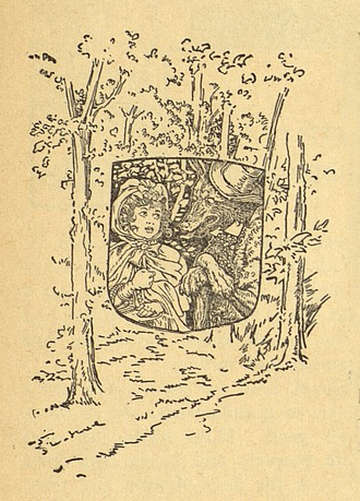 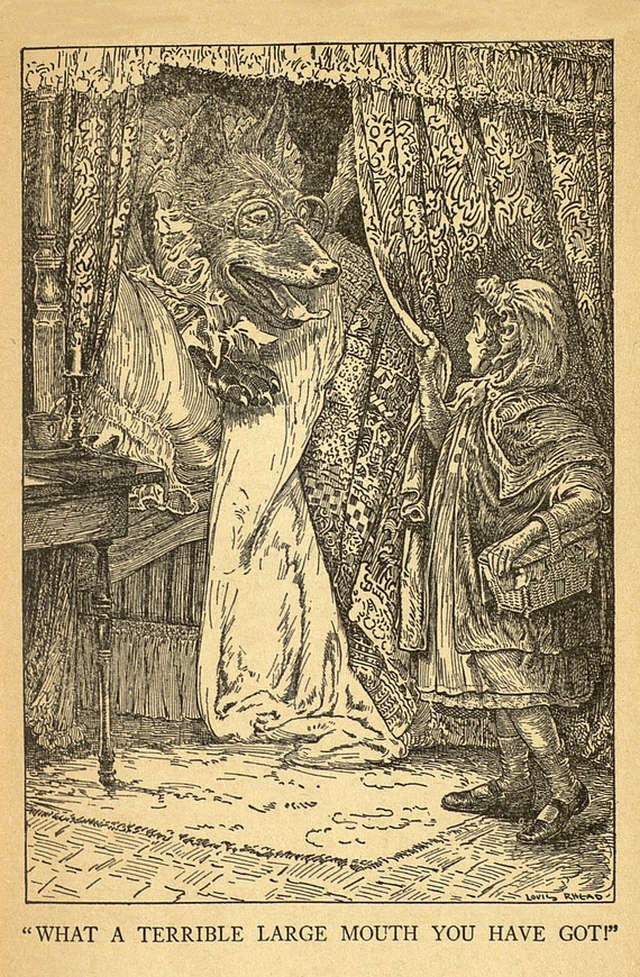 It's one of many stories about three brothers. Two were selfish and punished, the youngest was kind and rewarded - with a goose who layed golden eggs. This goose of course attracted problems yet in the end turned into a blessing. The youngest boy earned a princess' hand and later became a king. 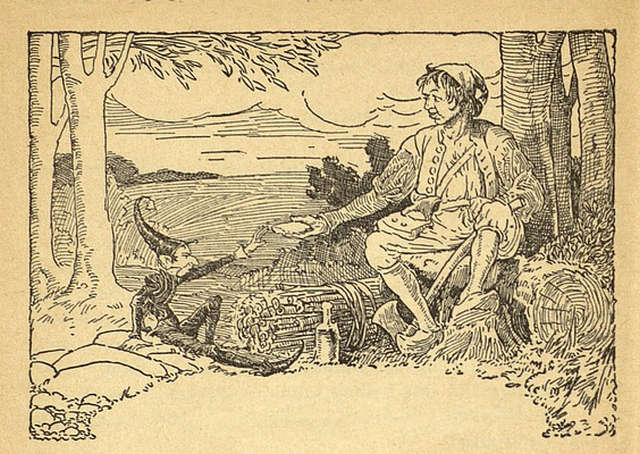 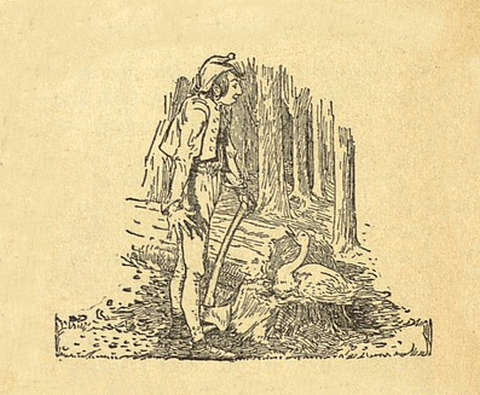 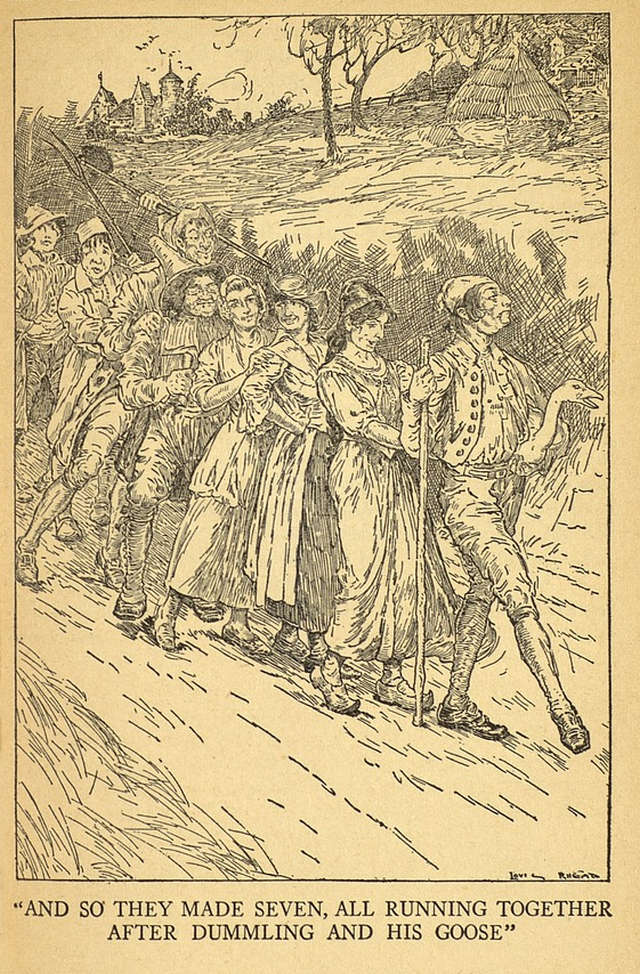 The Wishing Table, the Gold Ass and the Cudgel

There was a tailor who had three sons and a goat. Sons took care of the goat but the goat lied they didn't get her enough food, so he banished the out of the house one by one. They got jobs and after a while each one of them a very special reward. The eldest got a wishing table where was always enough food, the middle one an ass which cought out golden coins and the youngest a stick which beat everybody but himself until he orderes to stop.

The older sons were robbed from their tresures on their return home, yet the youngest managed to get both with him and at the end all three joind their father who in the meantime realized how treacherous was his goat and how stupid was him who belived the goat instead of his children. 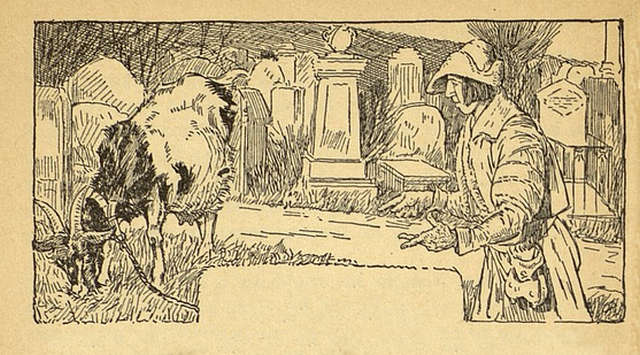 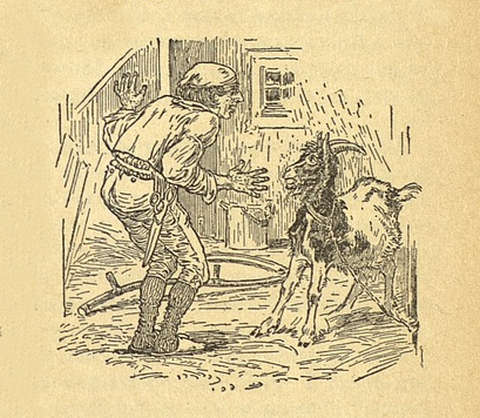 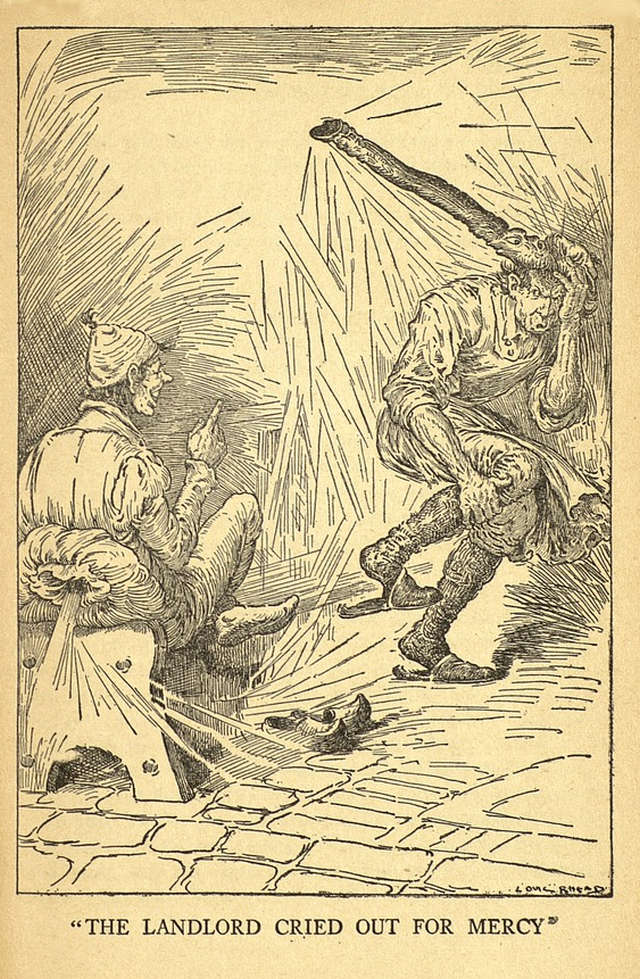 The Mouse, the Bird, and the Sausage

A mouse, a bird, and a sausage lived together. They divided their house duties but one day the bird decided it's time for change. So the sausage should take care of food instead of cooking, the bird of fire instead of searching for food, and the mouse for cooking. Unfortunately a dog ate the sausage, the mouse died in the pot trying to immitate the sausage's style of cooking with jumping in and out of the pot and the bird burnt the house and drowned in the veil while trying to save it. 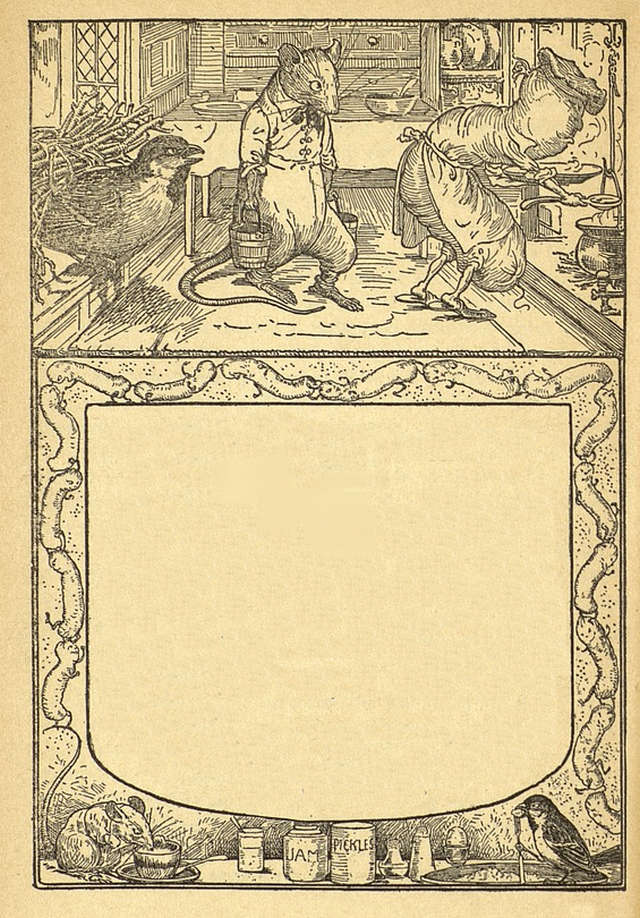 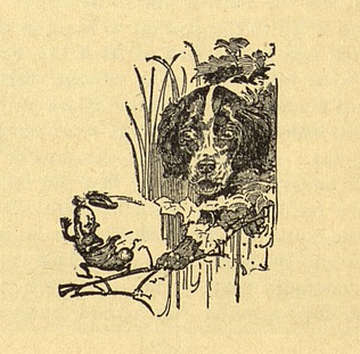 This fairy tale is better known under another title: The Golden Bird. It0s starts with a mystery - somebody is stealing golden apples from the king's garden. Three brothers tried to find the thief, elder two falling asleep and the youngest seeing a golden bird. One by one all three went on hunt after the bird, the older two miserably failing and the youngest with a help of a talking fox getting the golden bird, a golden horse, and a princess. On the way back he saved lives of his brothers who tried to kill him.

Fortunately, the youngest son survived, his brothers were punished, the talking fox rescued from the curse becoming a prince, who was the princess' brother, lost many years ago. 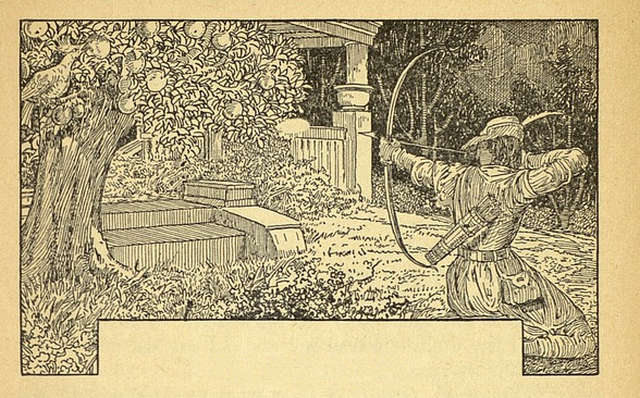 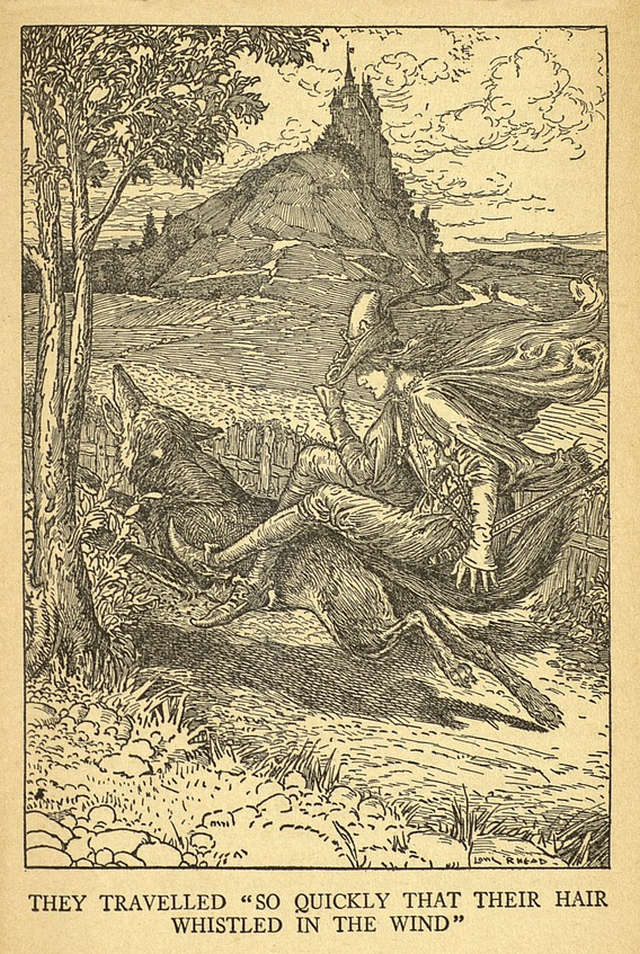 The Fisherman and His Wife

A classic tale about a man who caught a fish and release it in exchange for fulfilling his wishes. His wife use these wishes so extensively they both end in the same poverty as they began. A very convincing story about greed and lack of gratefulness. 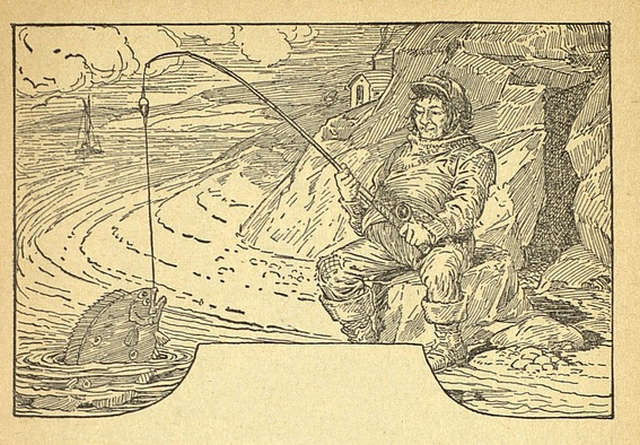 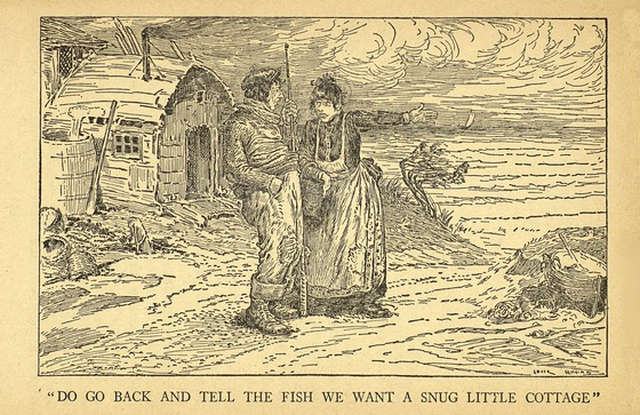 There was a king with twelve sons expecting another child. He decided to kill all boys if a girl will be born. The queen warned them, so they escaped. When the girl was born, she was raised as an only cild until she found out about her brothers. She found them in the woods only to loose them thanks to weird magic which transformed them into twelve ravens.

She could only save them by remaining mute for seven years. In the meantime a young king found her, felt in love and married her. His jealous mother arranged for the girl a public execution because she convinced everybody such quiete girl must be wicked in heart. Just before they threw her on the burning stake, seven years passed. Twelve ravens came, scattered the fire, turned into princes and helped her to restore her rightful position of the queen. Kings' mother, on the other hand, was punished by cruel death. 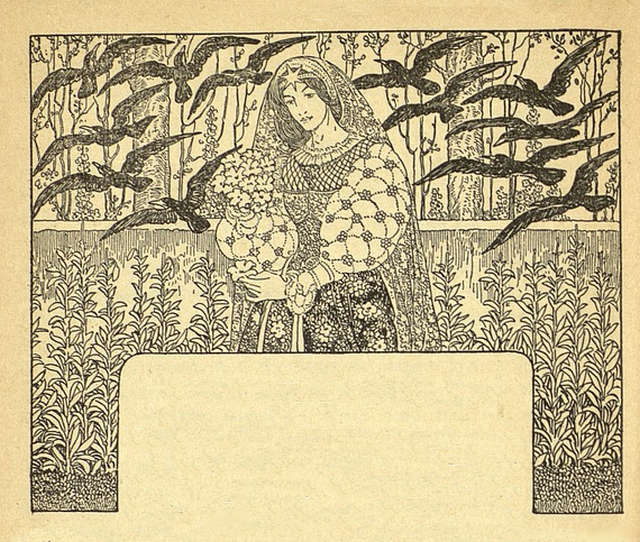 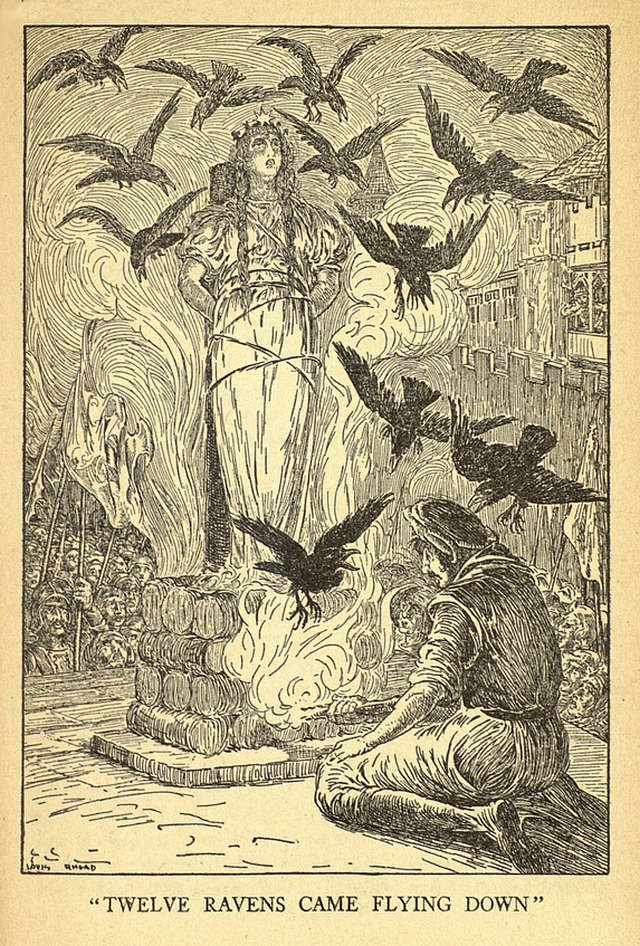 This is the best known version by Grimms. We have twelve fairies, a curse from the thirteenth, and a king who can't prevent his only daughter from being wounded by a spindle.

When she is fifteen, she really finds a spindle, falls asleep and is many years later rescued by a kiss from a handsome prince. 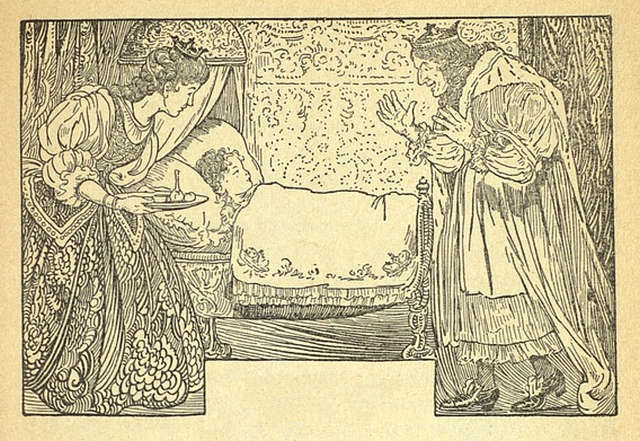 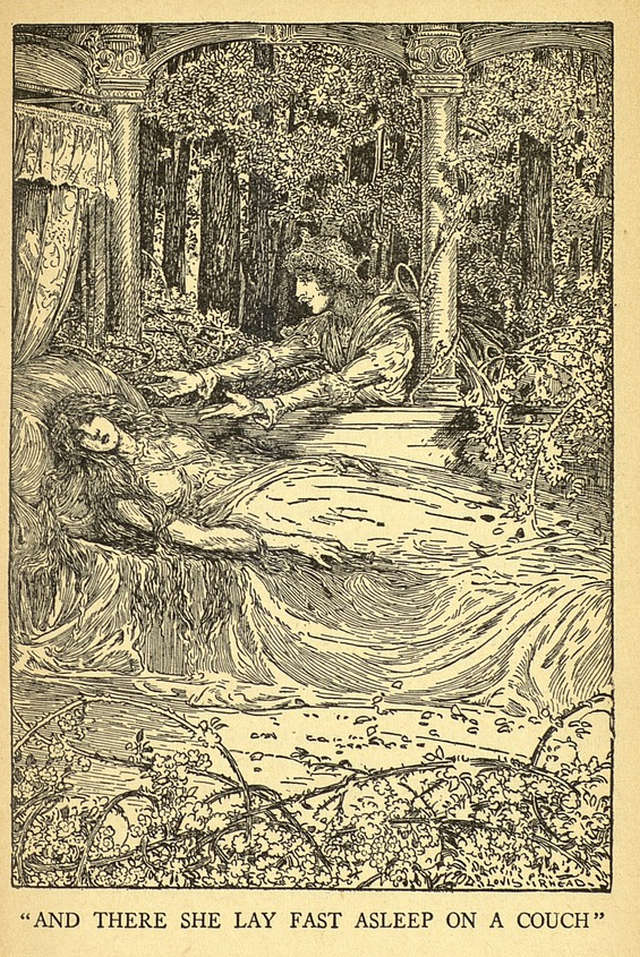 A queen was angry at her daughter and wished she turned into a raven. So the little princess became a bird. Later the raven found a man and told him how she could be frred from the spell. He tried three times but failed to resist temptations (wine) and fell asleep every single time.

She, now in the form of princess left him magic bread and wine to satisfy every man's hunger and thirst, a ring and a note where she will wait for him if he manages to get there. He searched, got some help from giants, stole more magical objects from robbers and finally reached the castle where she lived. They lived hapilly ever after. 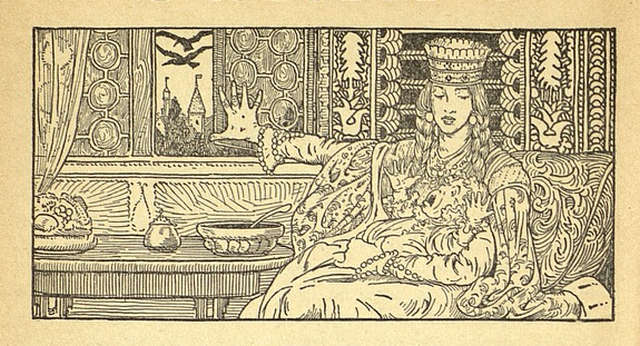 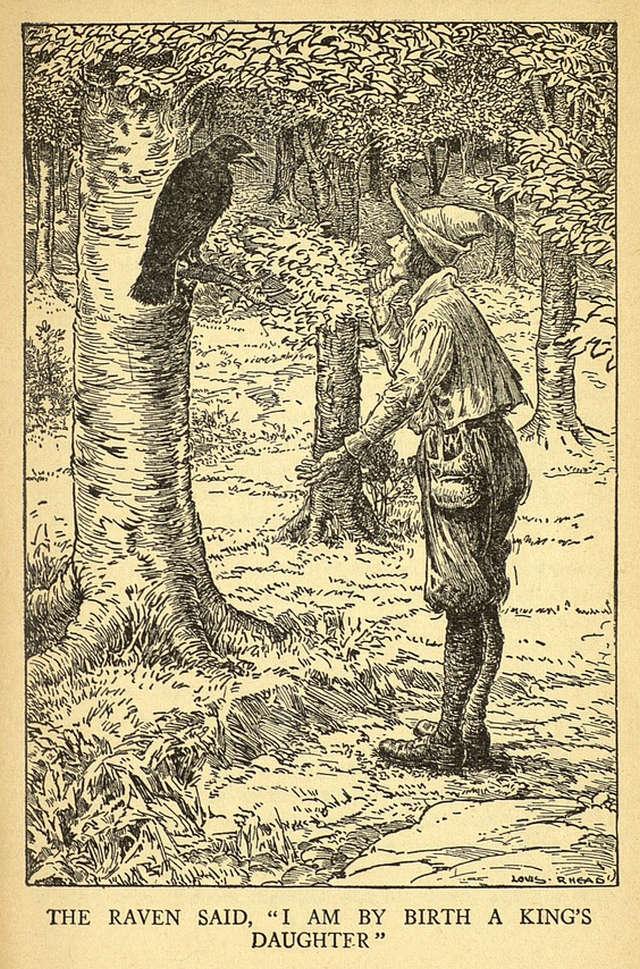 Fritz and his Friends

Fritz was an honest man with bad luck. When he lost nearly everything, he decided to travel with everything he still got. On his way, he saved lives to a mouse, a donkey and a bear who were all tortured. He spent all his money on that. So he decided to borrow some money from the king until he earns enough to return it. Guards arrested him and the judge decided he should be locked in a vat and thrown in the sea.

​Animals saved him. They found a magic stone with the ability to fulfill all the wishes of its owner. Fritz managed to lose a stone too, but after several complications, animals got it back and they all lived together happily ever after. 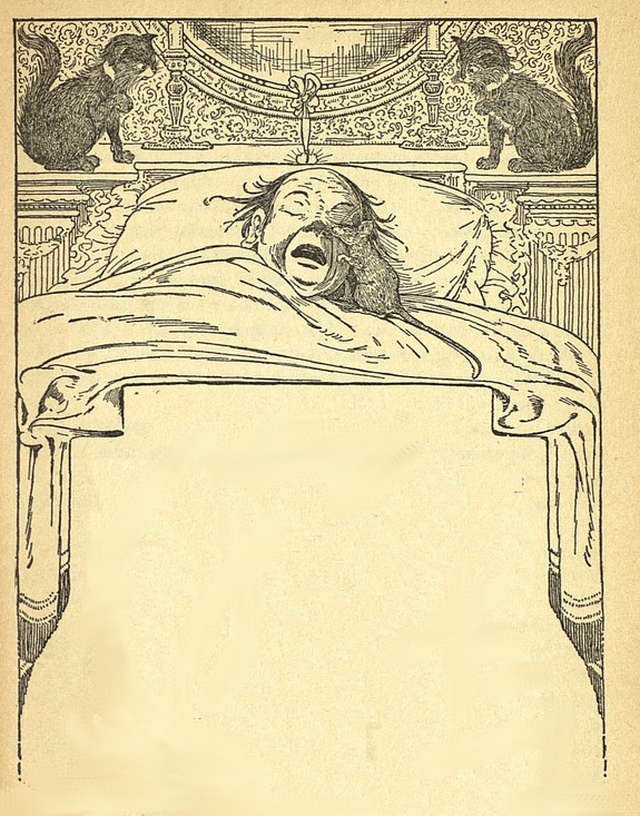 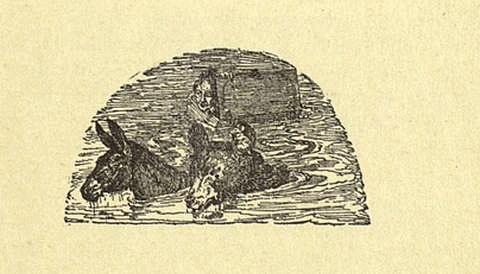 The Elfin Grove
Bearskin
The Adventures of Chanticleer and Partlet
Old Sultan
The Man in the Bush
The Robber Bridegroom
Ashputtel
The Three Spinning Fairies
Rumpel-stilts-ken
Mother Holle
The Nose-tree
The Goose-girl
Faithful John
The Seven Ravens
The Three Sluggards
Kings Grizzle-beard
The Tom-tis and the Bear
The wonderful Musician
The Queen Bee
The Dog and the Sparrow
The Man in the Bag
The Forbidden Room
Karl Katz
Frederick and Catherine
The Three Children of Fortune
Mrs. Fox
The Changeling
Hans in Luck
The Bear and the Scrattel
Tom Thumb
Snow-White
The Four Craftsmen
Cat-skin
Jorinda and Jorindel
Thumbling the Dwarf and Thumbling the Giant
The Juniper-tree
The Water of Life
The Blue Light
The Water Fairy
The Three Crows
The Frog-prince
The Elves and the Cobbler
The Frog-bride
The Dancing Shoes
The Valiant Tailor
Giant Golden-beard
Pee-Wit
Hansel and Grethel
Lily and the Lion
Rapunzel
Donkey-wort
The King of the Golden Mountain
The Bremen Town Musicians
Brother and Sister
The Fox and the Horse
Hans and his Wife Grettel
The Five Servants