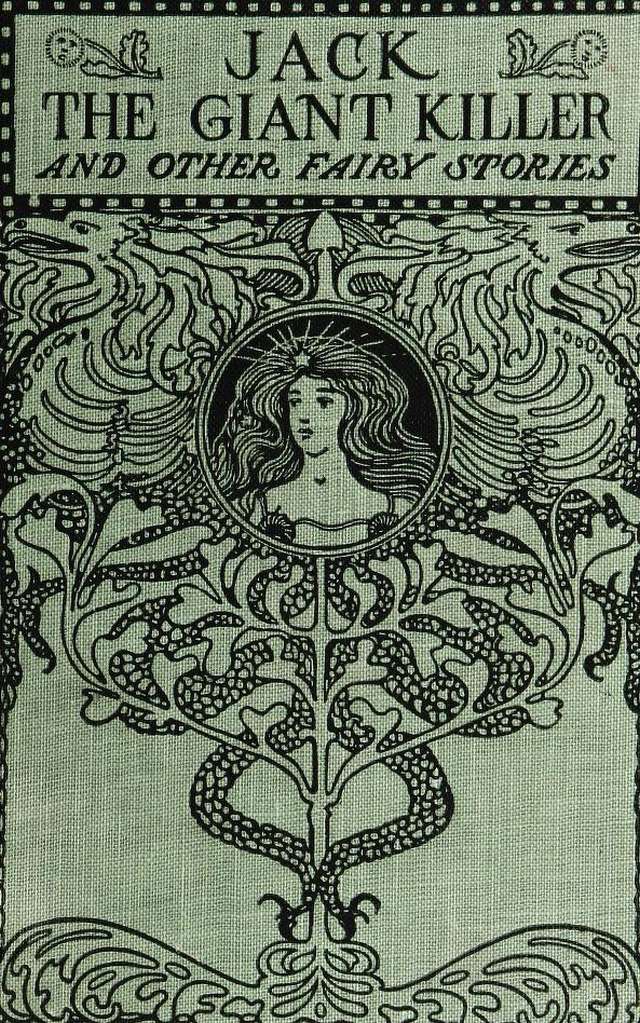 The history of Jack the Giant-killer, and other stories, based on the tales in the 'Blue fairy book' by Andrew Lang

Andrew Lang wrote numerous works for children and grown-ups yet his name went to posterity almost exclusively with so-called rainbow fairy books. The series started with The Blue Fairy Book with some of the best-known tales from different sources. The book was not just the beginning of the whole series, it was so popular it had a few spin-offs with selected material from this book only as well. 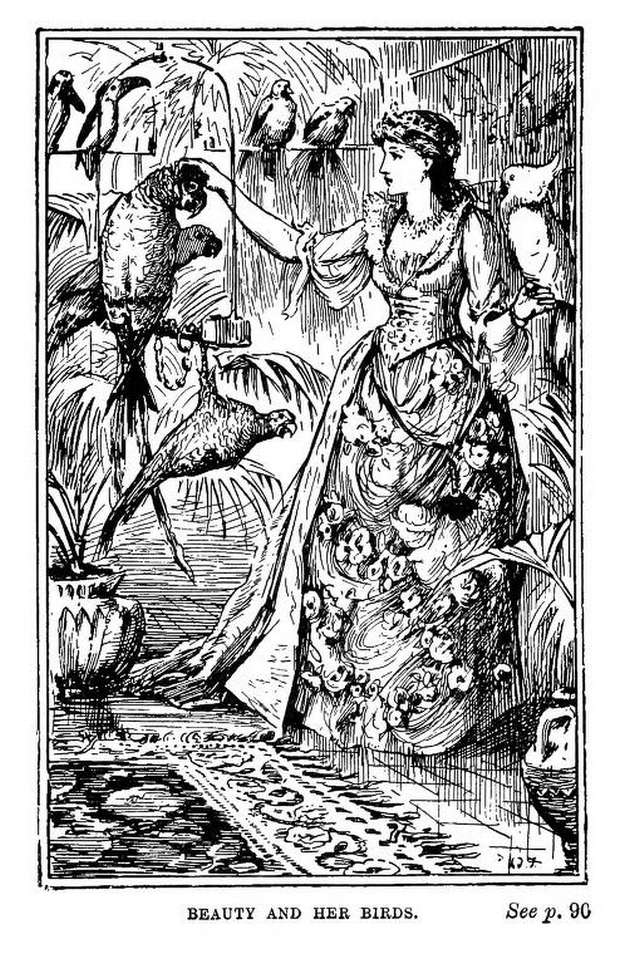 ​This volume is such an example bringing only three fairy tales with approximately two dozens illustrations by Henry Justice Ford. Henry Justice Ford made a tremendous work in this case, illustrating The Beauty and the Beast with thirteen illustrations altogether and adding his view on two of today less popular if not almost forgotten fairy tales: traditional English Jack the Giant-killer and Prince Hyacinth and the Dear Little Princess by Madame Leprince de Beaumont (who is credited as an author of Beauty and the Beast too, but Lang used older, lengthier, although abridged version by Gabrielle-Suzanne Barbot de Villeneuve in this case). 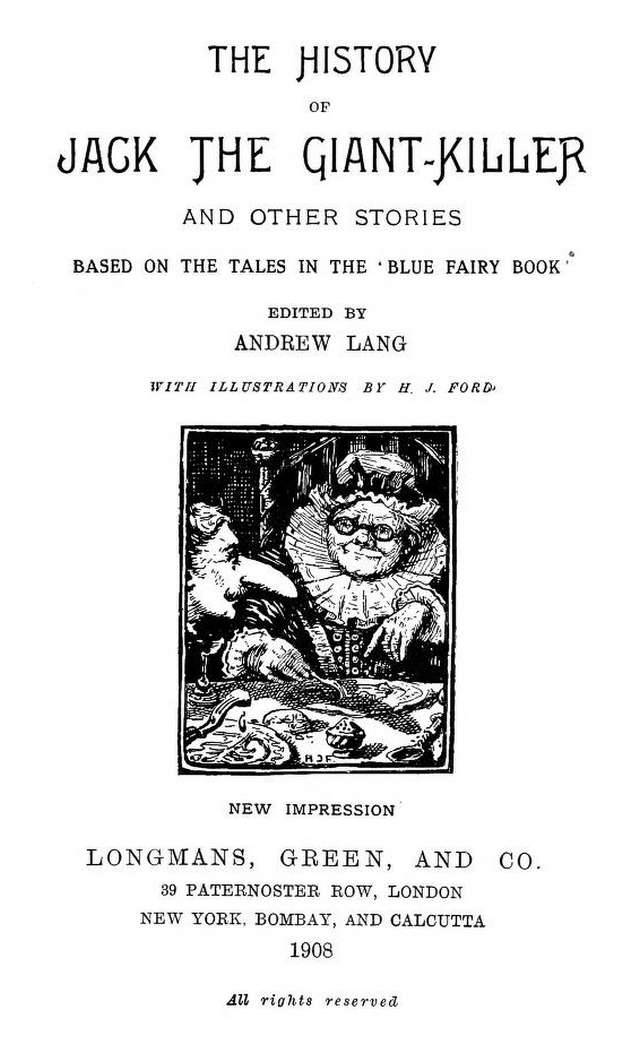 Here are the summarized stories with accompanying illustrations:

The History of Jack the Giant-killer

In times of King Arthur, there lived a guy called Jack in Cornwall. A dangerous giant lived in the neighborhood. so Jack once decided to dig a pit, cover it to make it look like solid ground, and make it a trap for the giant. 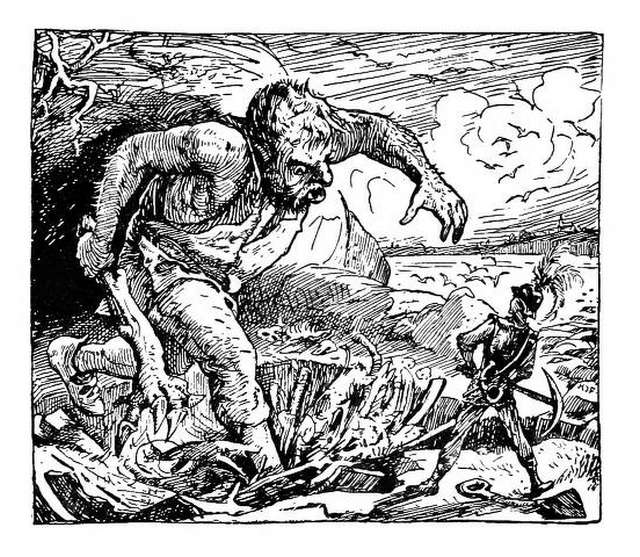 He was successful and sometime after he bumped into another giant.

This time the giant caught him and invited another one to have Jack for supper. But Jack was smart and used a strong cord to tie both giants by their necks and kill them both. He saved three ladies by the way. He proceeded his way to Wales. 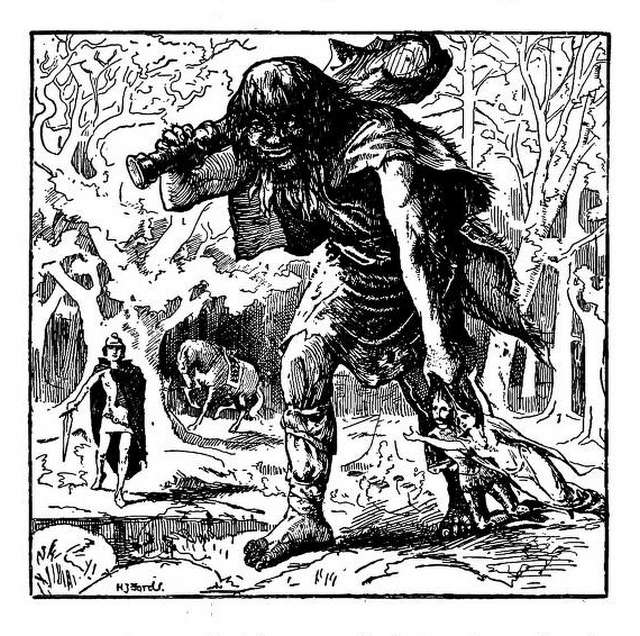 There he met another giant who tried to kill him by the night. Instead of that, Jack tricked the giant he can cure all the wounds and the giant stabbed himself. Jack found all kinds of magical objects in the giant's castle. With the help of the invisible coat, he killed another giant who was about to kill a knight and his lady. Then he went on to kill giant's brother too. 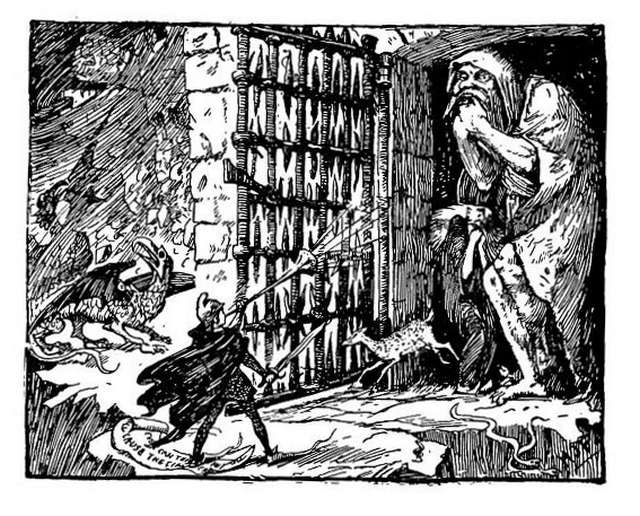 Not far away he reached an enchanted castle where a giant and an evil fairy took numerous knights and ladies under the spell which turned them into animals. Jack killed the giant, the fairy was carried away by the wind and all their victims were saved. Then Jack was introduced to the King who gave him a farm, a lovely lady to marry and Jack lived happily ever after.

There was a king who wanted to marry a princess but she was under the spell. King found out he can break the spell if he can tread on the tail of the princess' cat. It was not an easy task but one day the king managed to do that. The cat transformed into a tall man who cursed the king - his son will be unhappy until he found he has a too-long nose, but nobody must not tell him that. 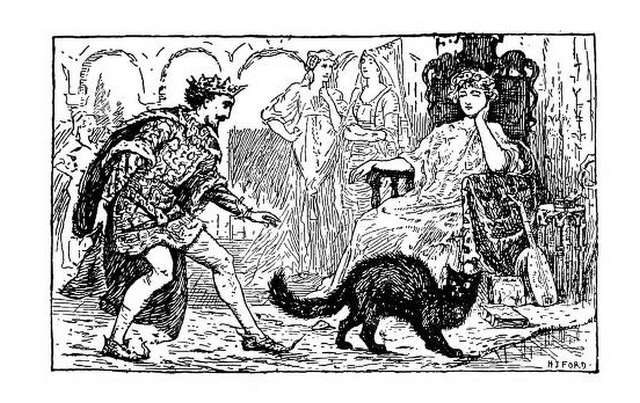 King married the princess, who became a queen, she gave birth to the prince Hyacinth and the king died. The prince grew up in belief every great man has a great nose and he, of course, was predestined to make many great deeds. 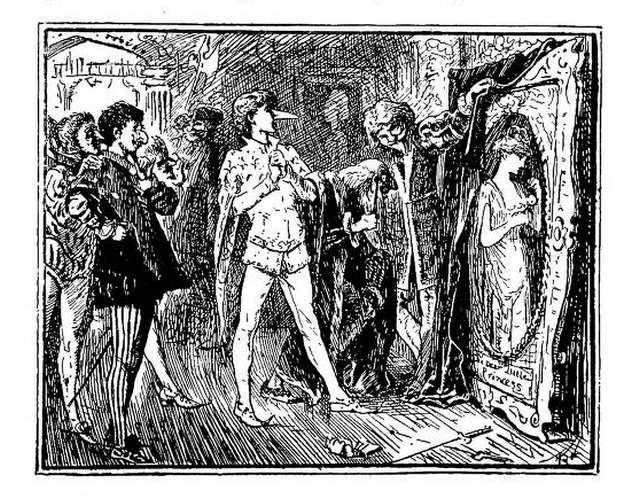 When he was twenty he met Dear Little Princess who, although having a tiny nose, was very lovely. She and her father agreed on marriage when a wicked fairy kidnapped her. 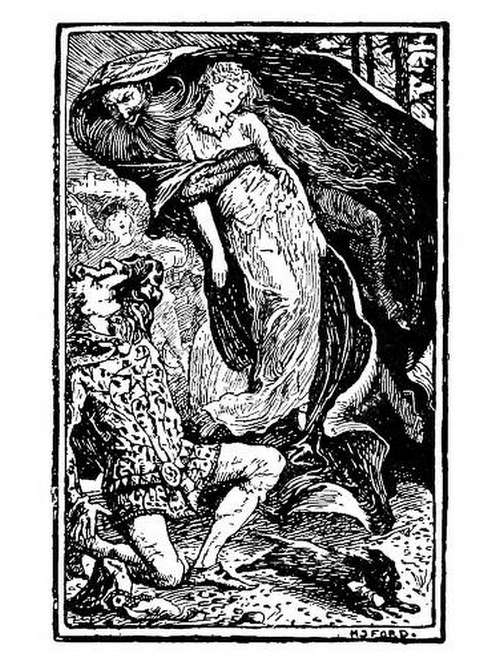 Prince Hyacinth went into the world to find her but at first, he only found a fairy who was his father's friend and suggested to him how to break the spell under which prince Hyacinth's mother once was. 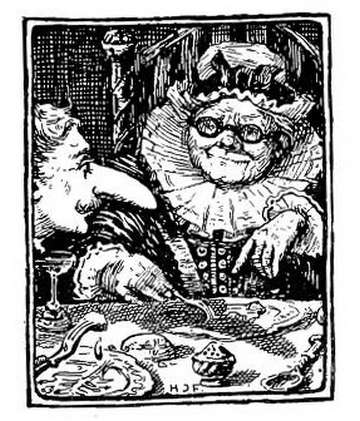 She was the first who told the prince his nose is huge and when he continued his travel many others told him the same. Finally, he came to the glass palace where Dear Little Princess was and tried to reach her. 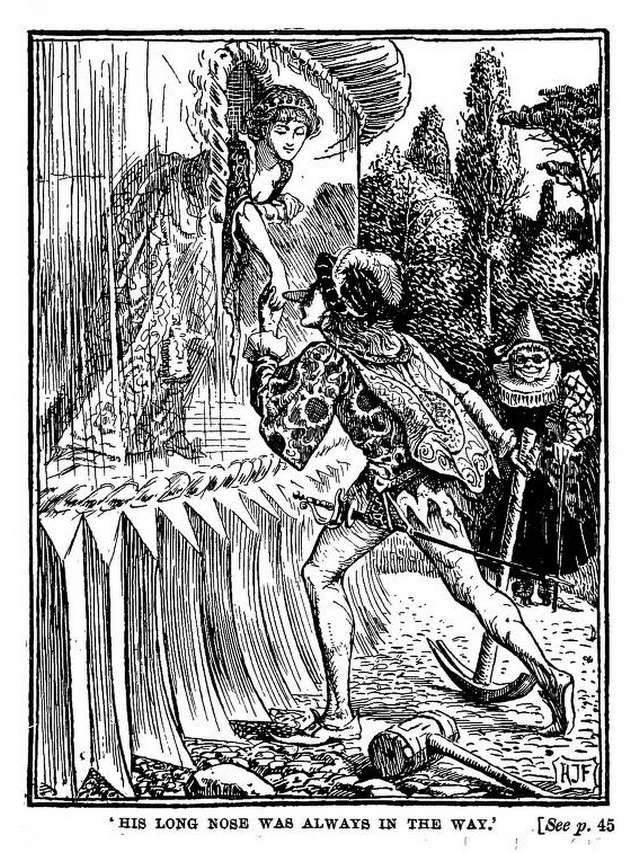 She managed to give him a hand but he couldn't kiss her because his nose was too big. When he finally realized his handicap, the palace broke into thousand pieces, the princess was saved and the prince's nose became normal. He learned his self-love kept him off knowing his own faults. Then they married and lived happily ever after.​

Beauty and the Beast

There was a rich man with six sons and six daughters. One day a series of troubles started - their house caught fire, his ships were lost in the see and his associates stole all his money. They had to move to a little house in the forest, everything that was left from the fortune. 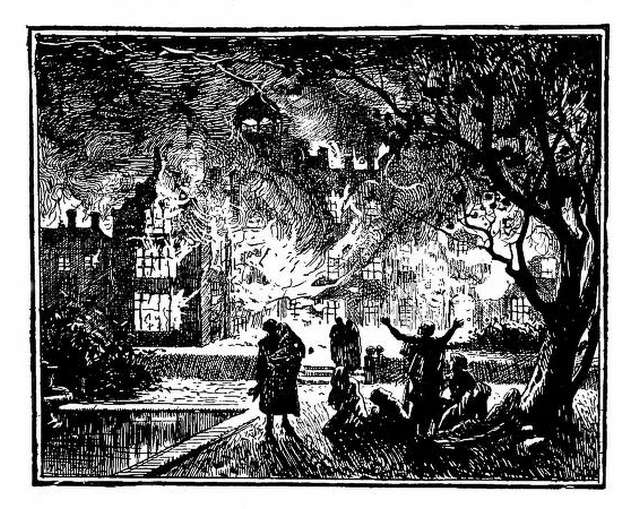 They were all very sad, only the youngest and prettiest daughter who was called Beauty tried to stay optimistic. Two years had passed before good news came into the house - one of the lost ships came safely to the harbor. 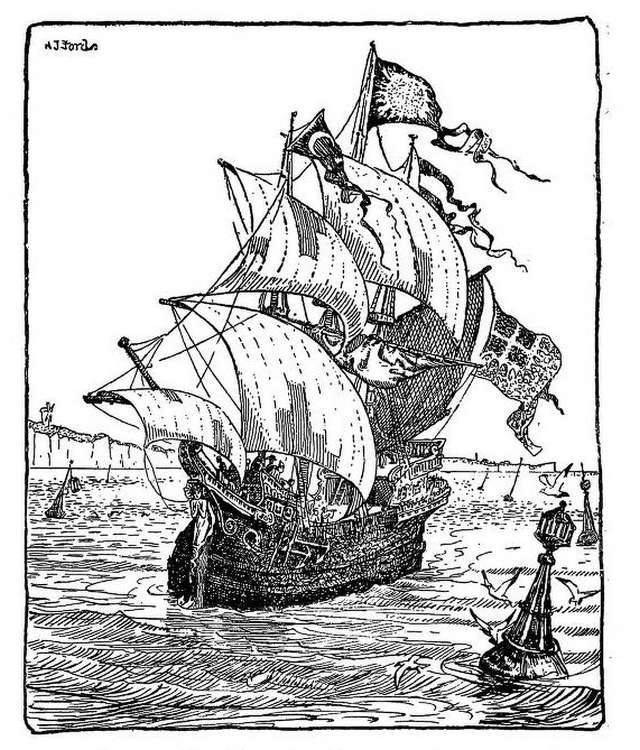 Everybody had expensive and extravagant wishes only Beauty just wanted for her father to come home safely. Finally, she wished for a rose because she hadn't seen one for such a long time. 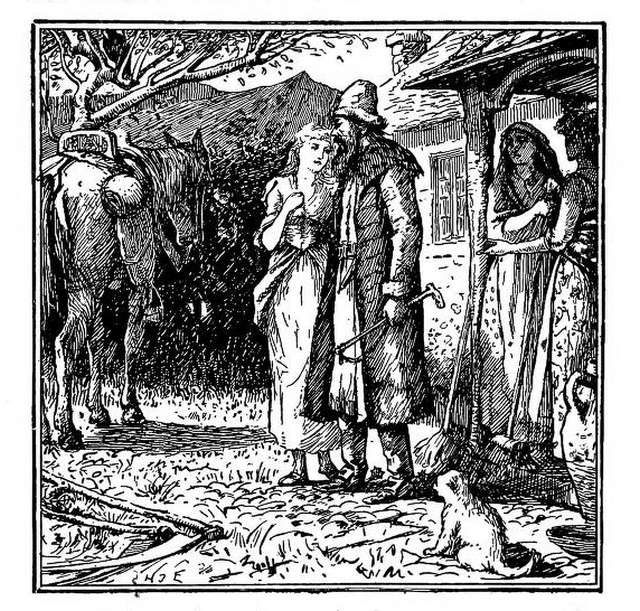 The merchant went to the harbor just to find out his old colleagues already shared all the goods from the ship making him just as poor as he was before. On the way back a snowstorm started and he was lost in the forest. Then he went to the castle. He found rooms full of beautiful things, fire, and food but no people in. 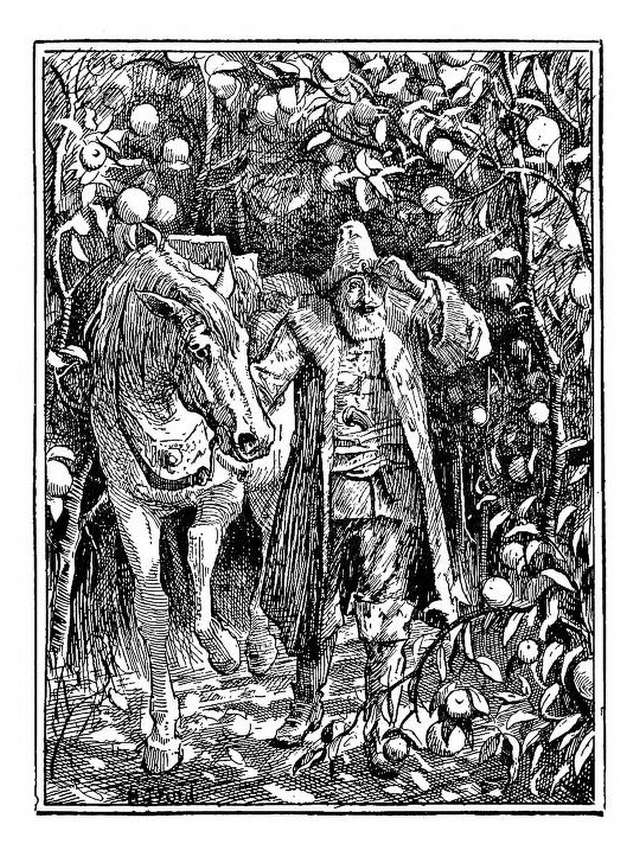 He searched the castle and the garden where beautiful birds were singing and flowers were blooming. He saw some roses and picked one. Then the Beast showed to him. The Beast was angry and promised him death but after hearing the merchant's story he made him an offer. If one of the daughters comes willingly to his castle, he can stay alive. 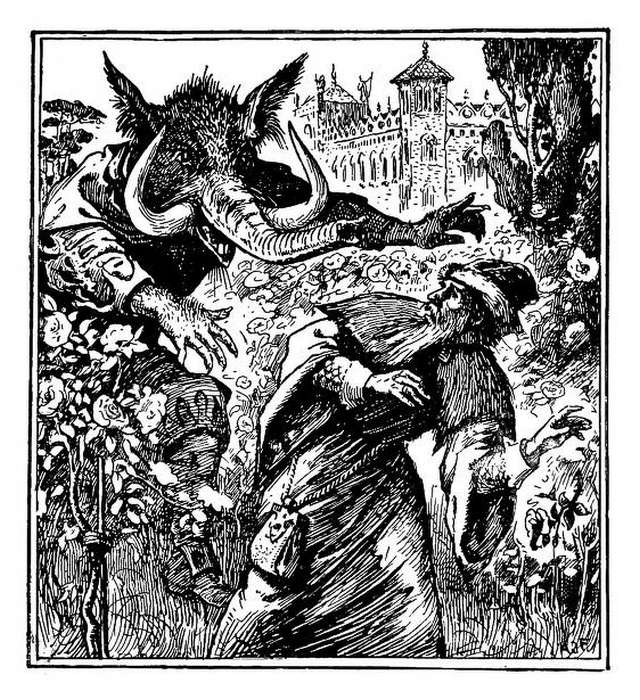 When the merchant returned home, Beauty decided to go with him to the Beast's castle. 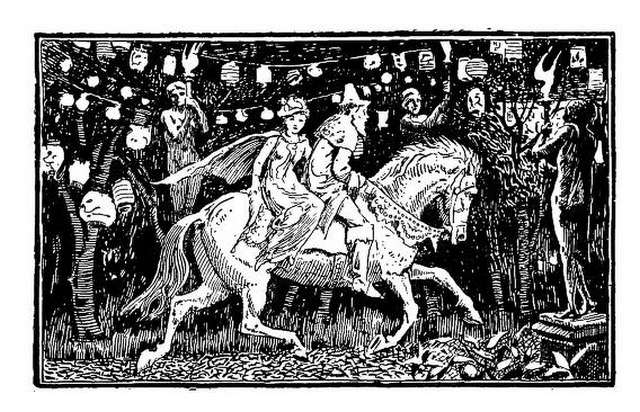 There the Beast gave all kinds of precious presents to the merchant and Beauty stayed with him alone. 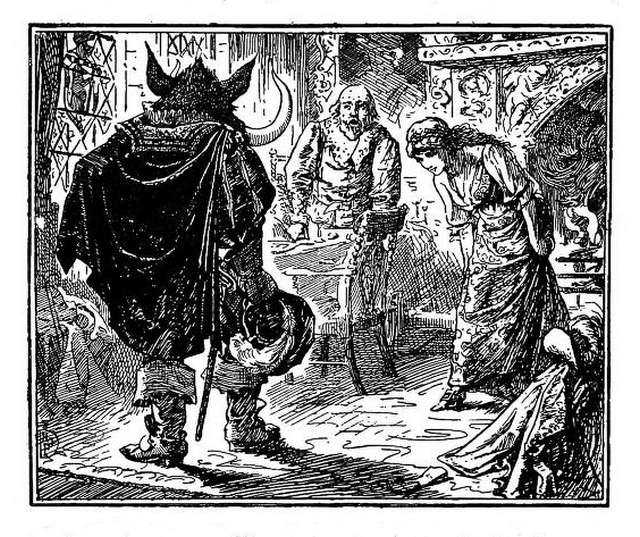 She dreamt about herself meeting a handsome prince who told her she should find him. When awake, she found a lot of pictures of the very same prince in the castle. 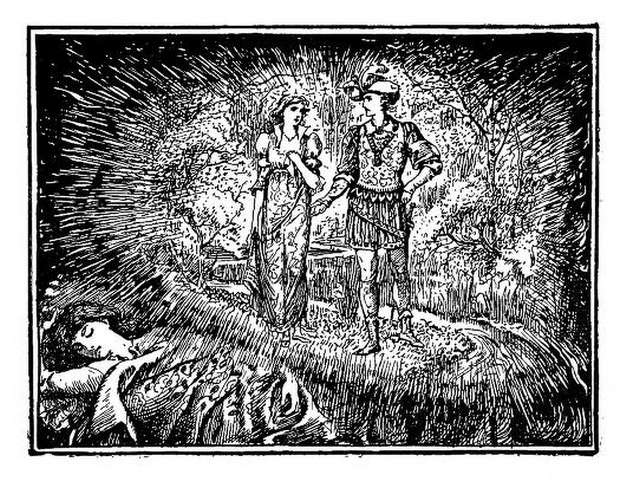 At dinners, the Beast kept her company. He was very nice and each time he asked her if she would marry him. She always answered with "No." One day she discovered a brook and the trees she saw in her dream with the handsome prince. She was wondering what was true and was a dream in this seemingly enchanted castle. She also found talking birds which helped her to spend time nicely and a room where all kinds of theatrical plays were performed.

The Beast still came every evening to keep her company and asking if she would marry him. She repeatedly said "No." and her dreams about a handsome prince persisted. Some time has passed before she longed to see her father and siblings. She asked the Beast for permission and he sadly let her go. She had to promise him she'll be back in two months. He gave her four huge chests of presents as well. 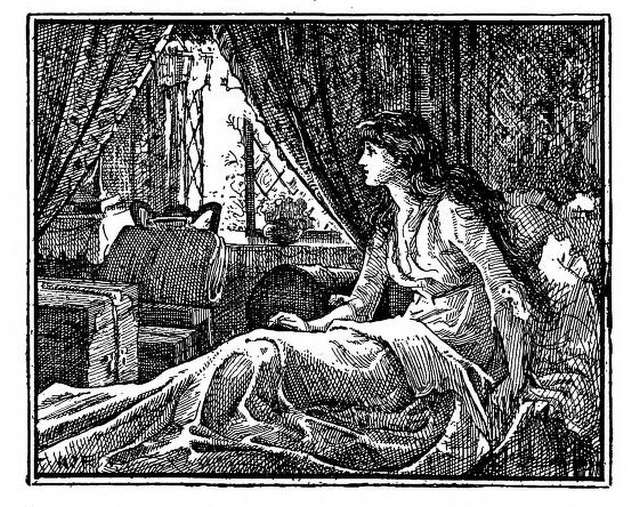 Her dreams about the prince who warned her not to trust her eyes but follow her heart continued. At her father's place, she asked father about the meaning and he suggested she should probably be nicer to the Beast because it is not his fault to be so ugly. She stayed longer than she promised until one night she dreamt about Beast dying.

Then she finally returned to the Beast's palace. She found him almost dead in the garden. 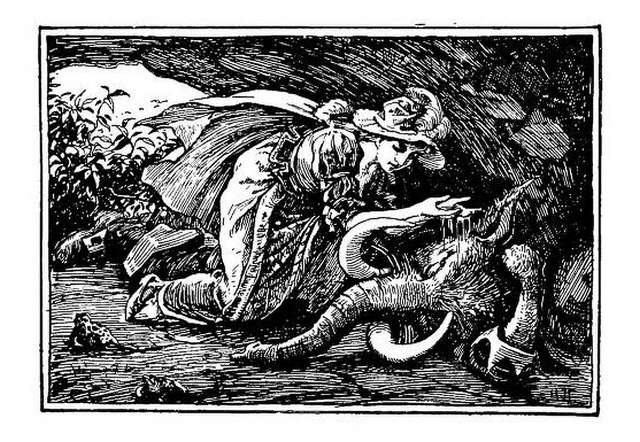 She told him she could not live without him anymore and he revived a bit. Later he asked her again if she would marry him and she said "Yes." Then the Beast transformed into a handsome prince she was already familiar with from her dreams. 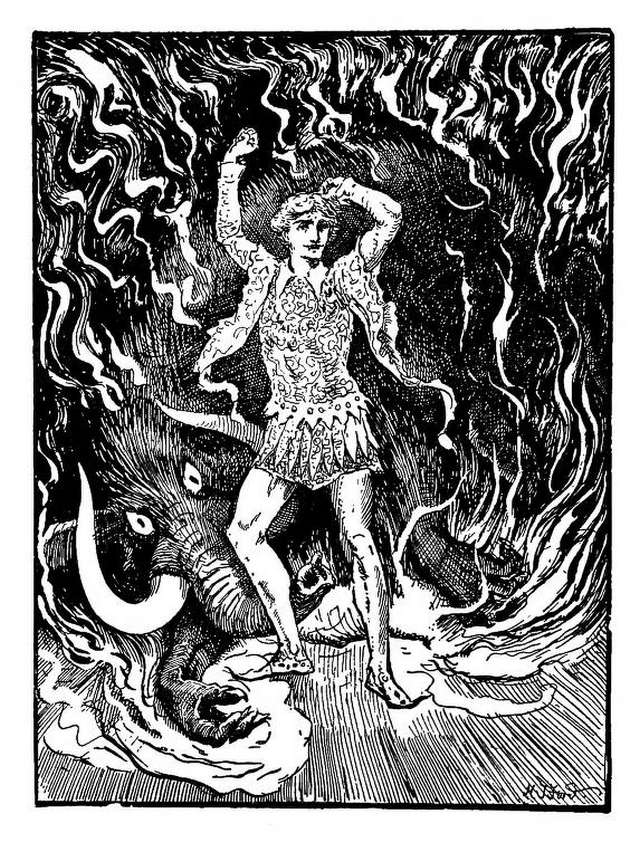 The castle suddenly became filled with noble men and women who were all enchanted until Beauty's love broke the spell on the Beast. They married and lived happily ever after. 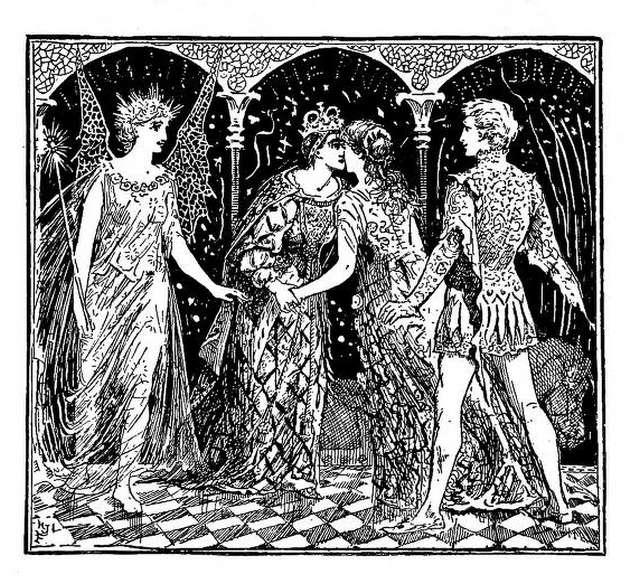 The book was published by Longman, Green, and Co., in London and New York, 1908.