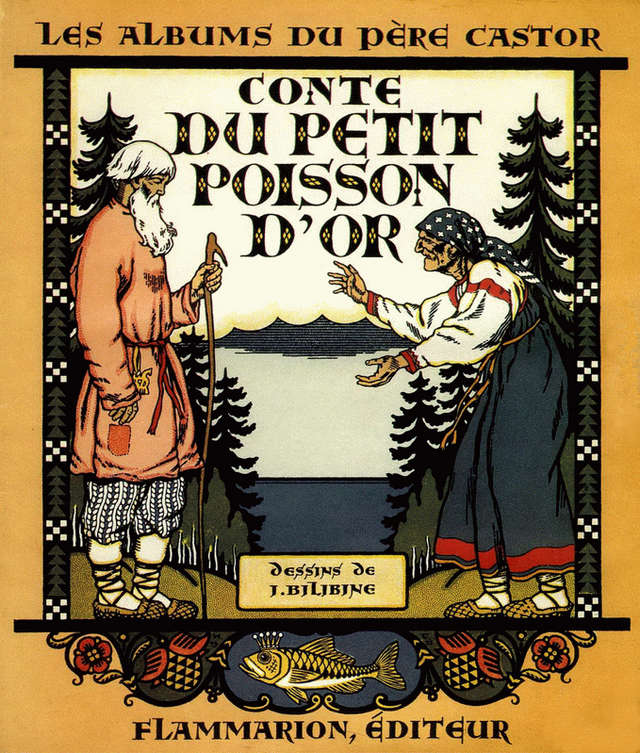 The Fisherman and the Fish

The Fisherman and the Fish by Ivan Bilibin

The Fisherman and the Fish (sometimes Golden Fish) is a Russian variation of a well-known fairy tale about a fisherman who caught a fish and release it in exchange of fulfilled wishes. Most people know it by the title The Fisherman and His Wife (KHM 19 in Children in Household Tales) by Brothers Grimm. 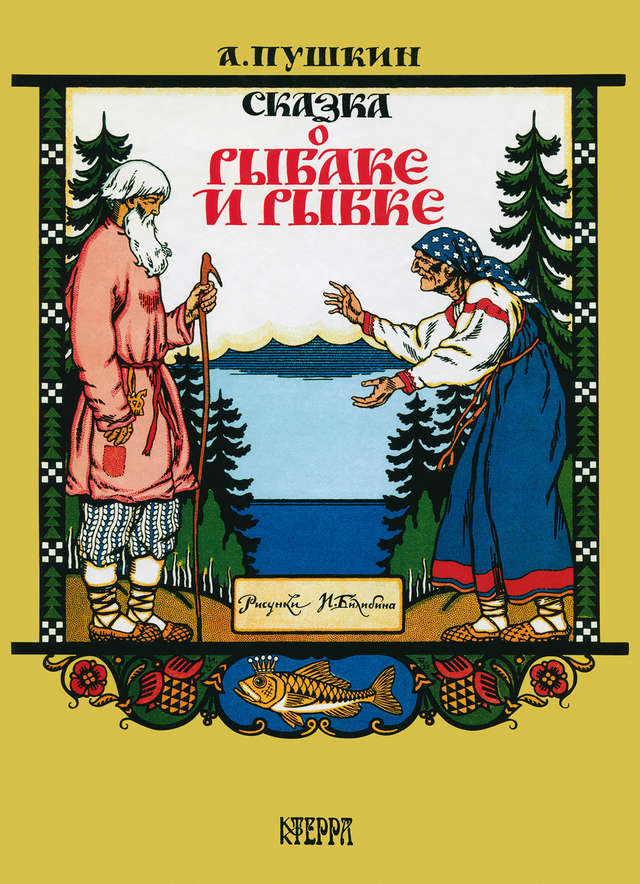 At first, it looks the deal will work for both sides but there's an unexpected variable - fisherman's wife. She is not satisfied with a better home. Even a palace is not enough for her. And when she gets the most prestigious palace anybody can imagine (service included), she wants improvement of her social status.

While some Russian fairy tales significantly differ from German variants this version written by Pushkin and illustrated by Bilibin pretty faithfully follows the same plot. The main difference is the rhyme instead of the prose. What the presented picture book makes truly special is Bilibin's art. Apart from the scenes with his signature folk undertones, there are also numerous decorative borders and capital in Art Nouveau style.

The book was first published in France and later in Russia. 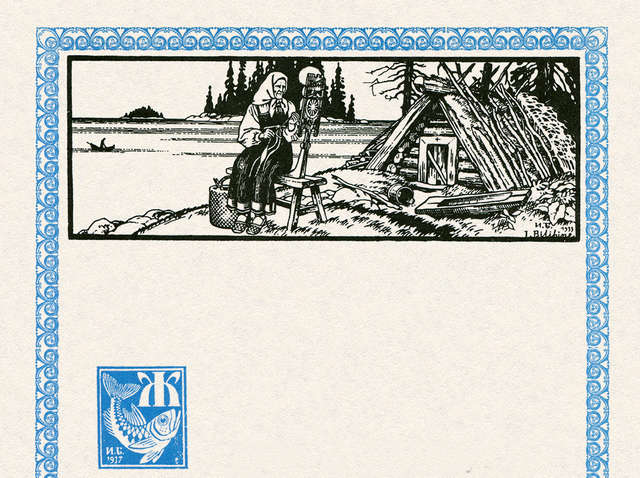 Fisherman and his wife lived in a poor hut. 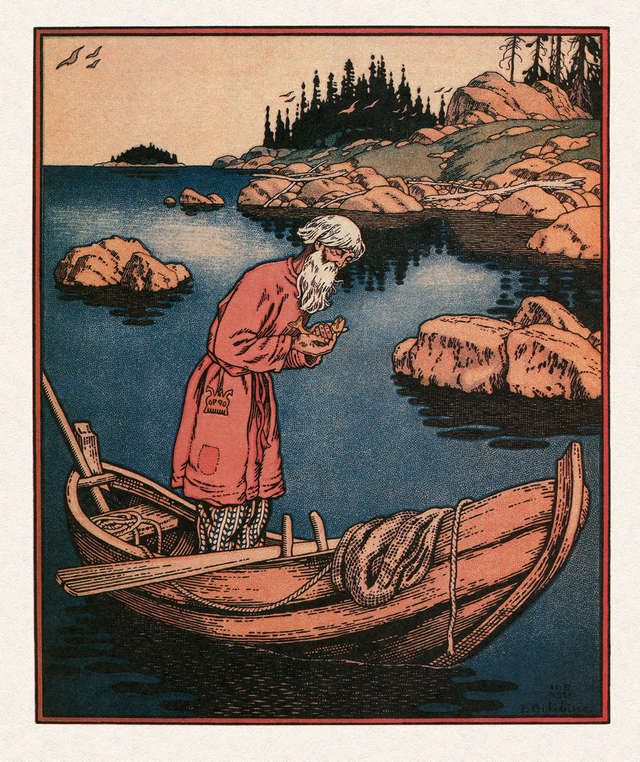 One day he caught a small fish. It convinced him to let it free. He'll be awarded for that. 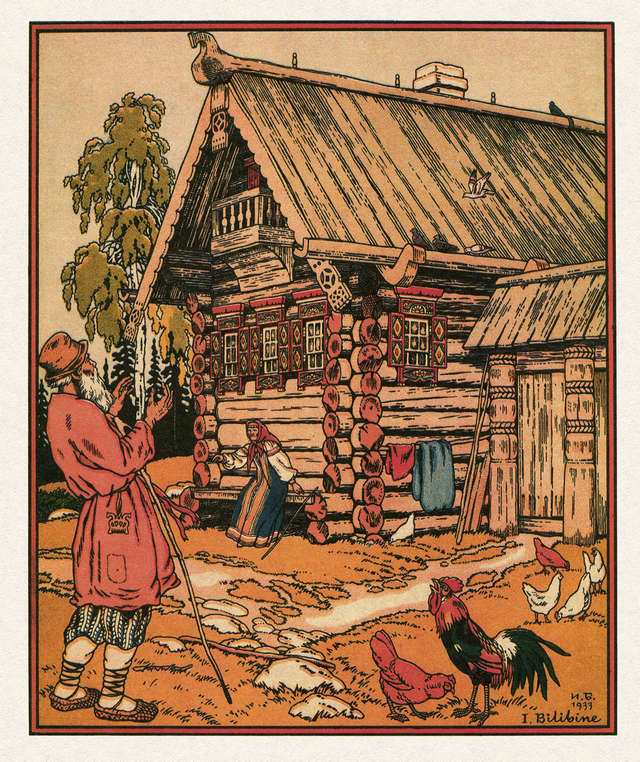 Well, now they have a big and beautiful house. But is this enough? His wife wants more. 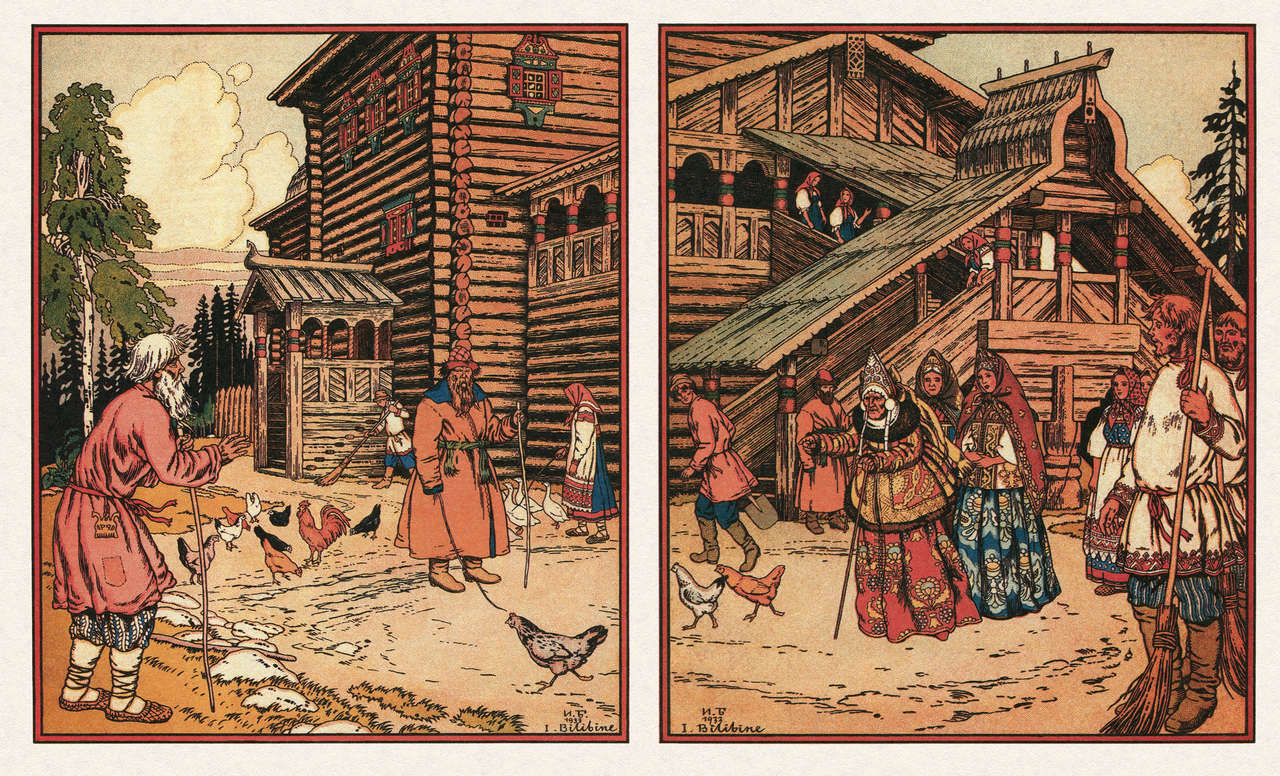 A lovely house, some animals, and workers to help ... Life really looks great now. But is this enough?

The fisherman has to return to the see again. Fish will help. Again. It promised, so it has to. Yet it seems pretty angry. 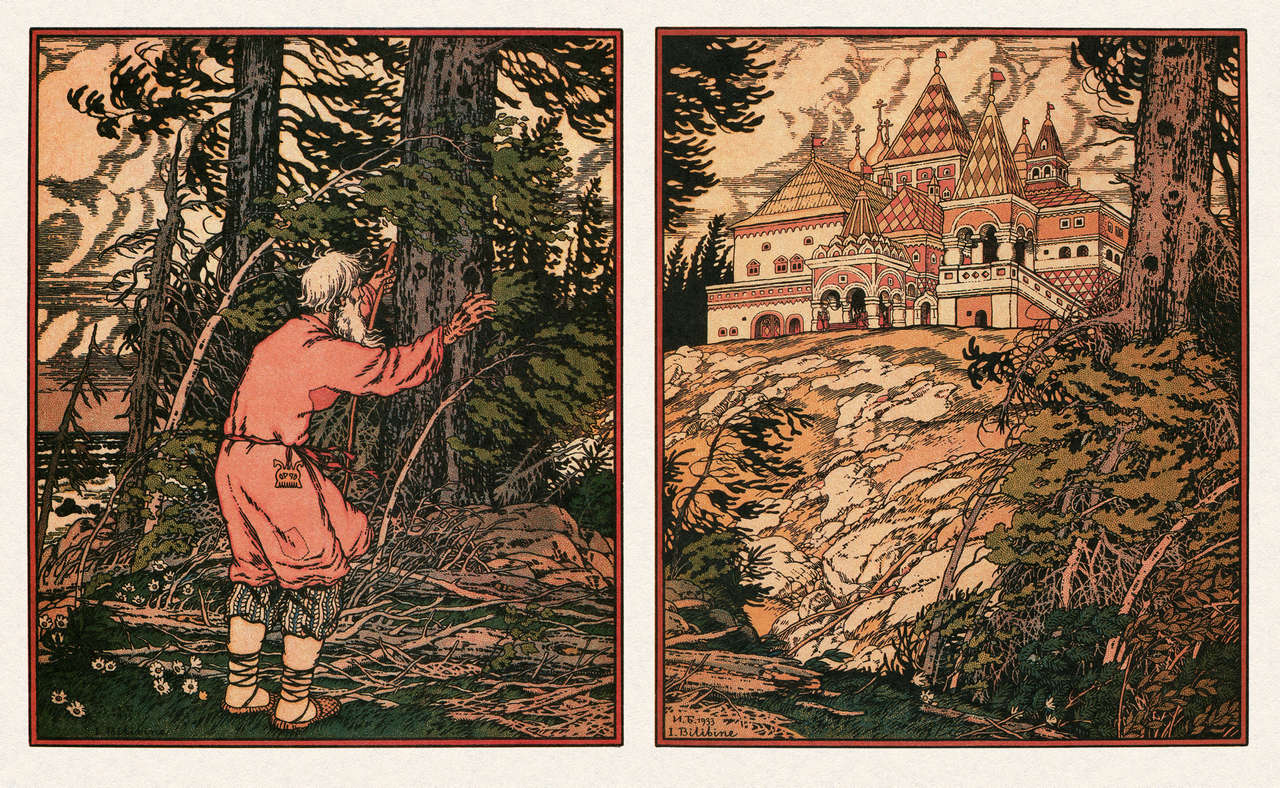 The fisherman doesn't have a house anymore. Now he lives in a palace. A huge palace with servants and everything. 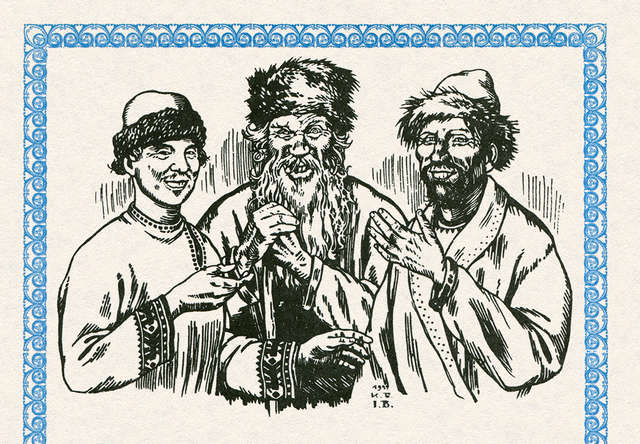 He and his wife belong to nobility now. But is this enough? 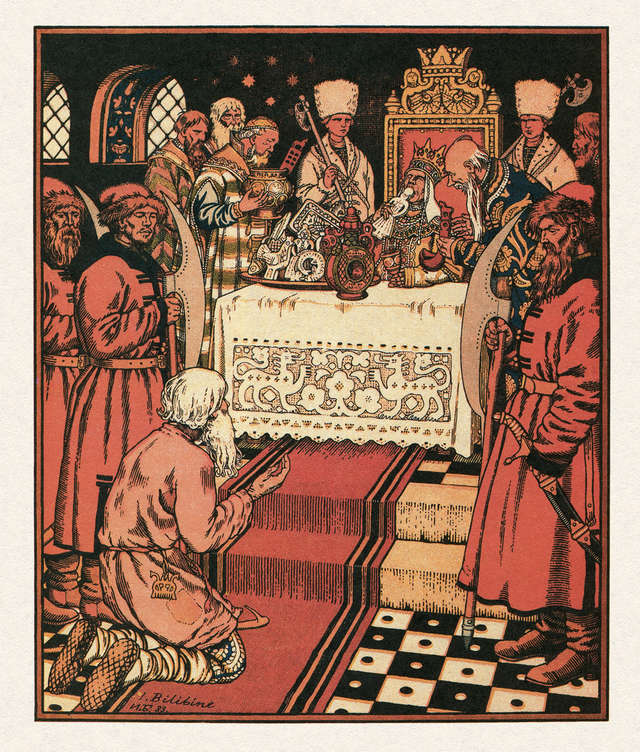 Fisherman's wife wants even more. After all, he spared the fish's life and it made a promise to fulfill his wishes, right? 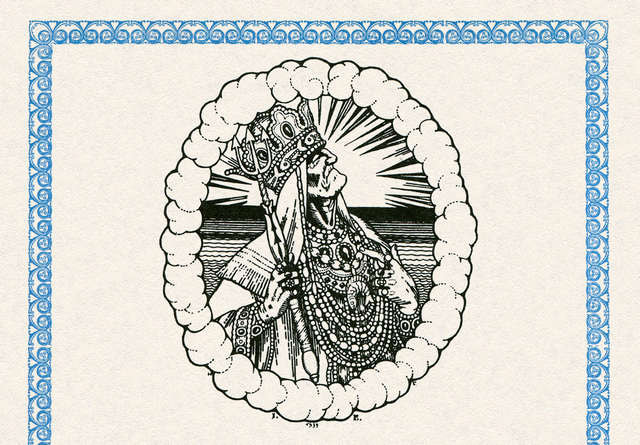 Fisherman's wife wants to become the most important person in the world. Well, why not in the Universe? 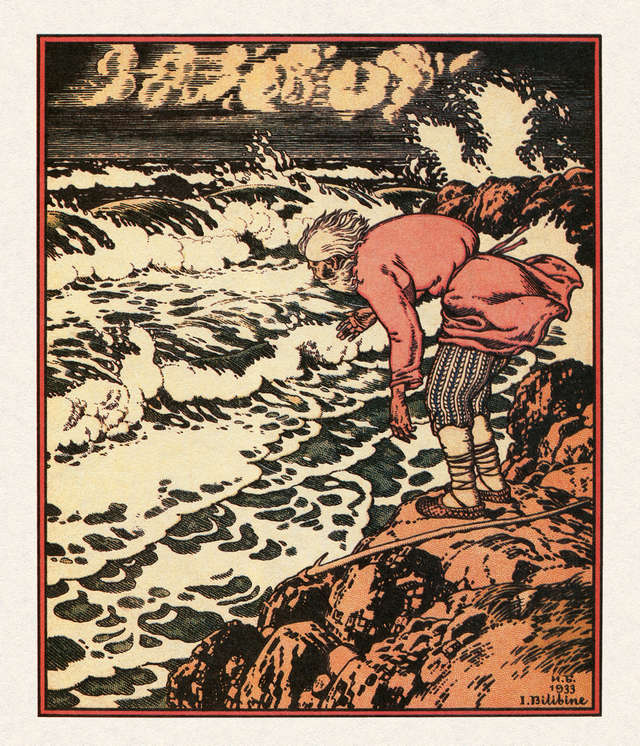 The fisherman doesn't have any other option. He has to return to the coast and ask for another favor. Fish seems very angry now. 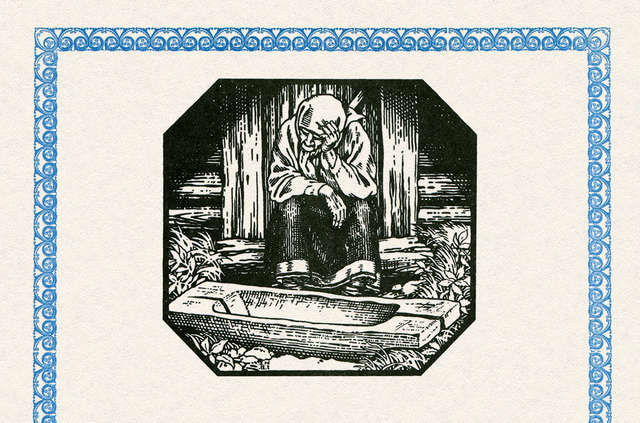 When he returns the old hut is back. His poor wife is sitting in front of the door. She had her chance. They both had. But nothing was good enough for them! 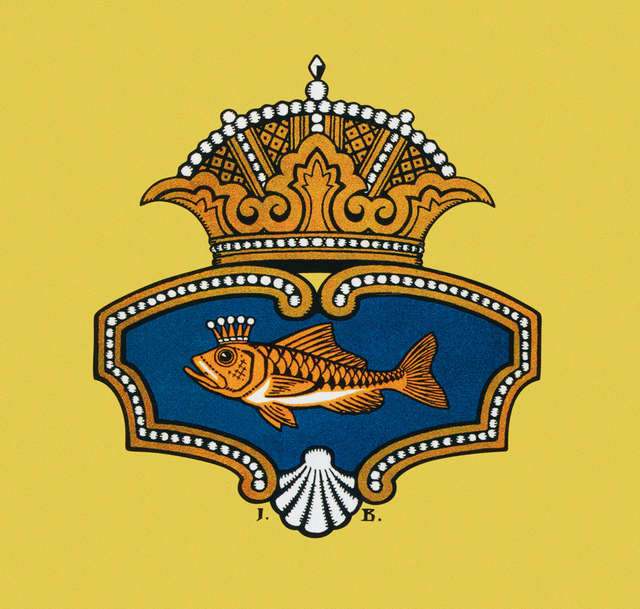 Please note how Bilibin played with waves being scarier and scarier as the fisherman's demands escalate and fish's patience vanishes. He used similar patterns like in his view on Andersen's Little Mermaid.

While this story belongs to all classic collections of fairy tales it's not very popular due its theme. We all prefer stories about  courage and sacrifice, possibly with happy endings, aren't we?