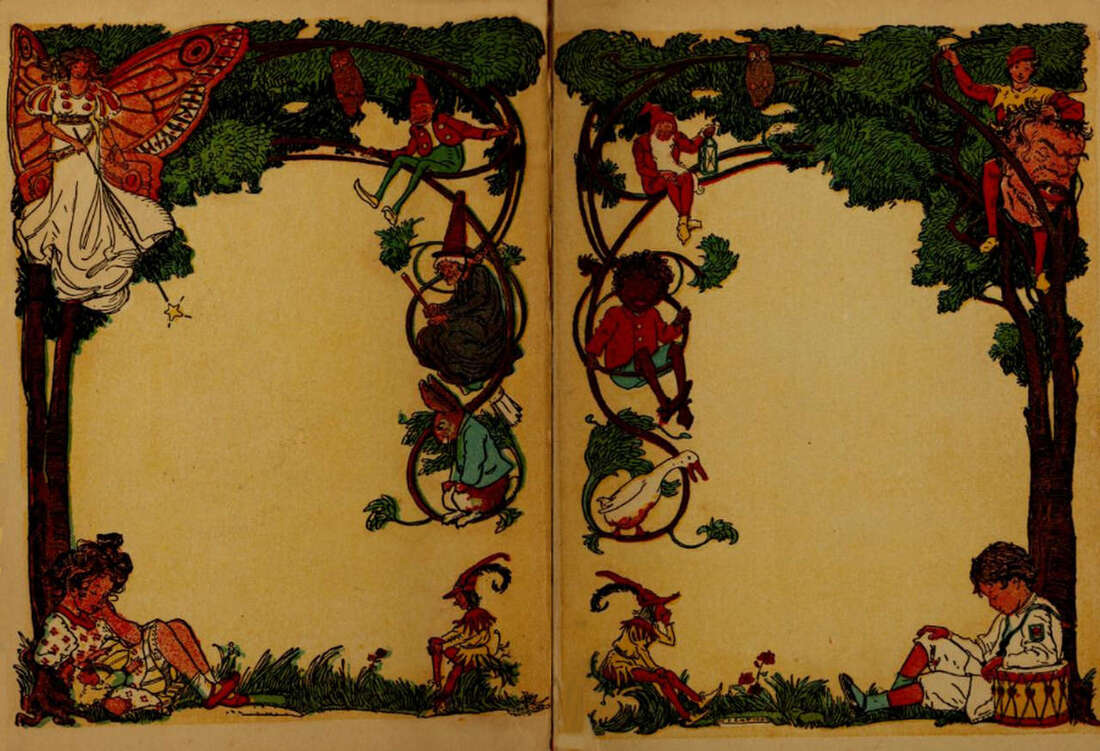 Such endpaper was used for all books in the series. Apart from the decorative function it also connected the cover with the rest of the book. 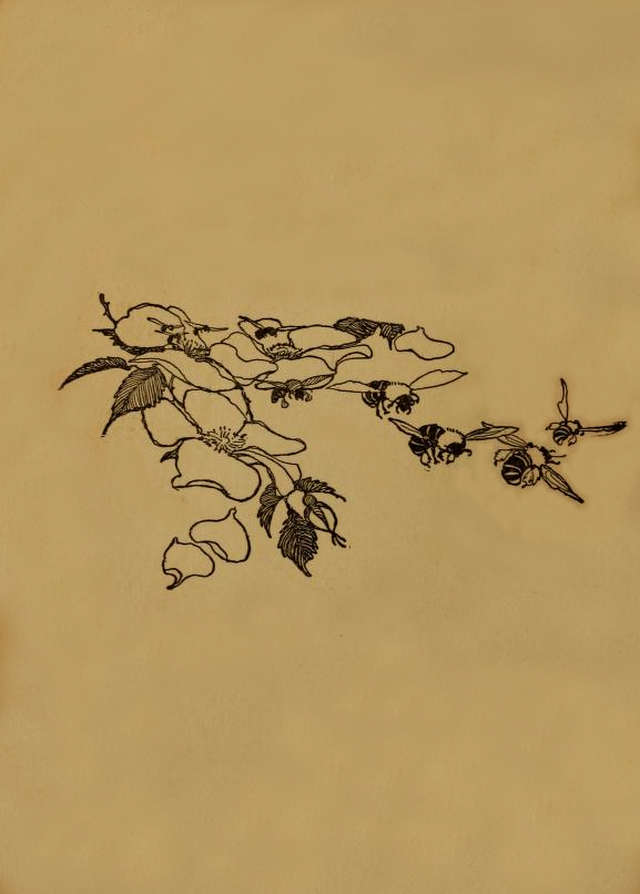 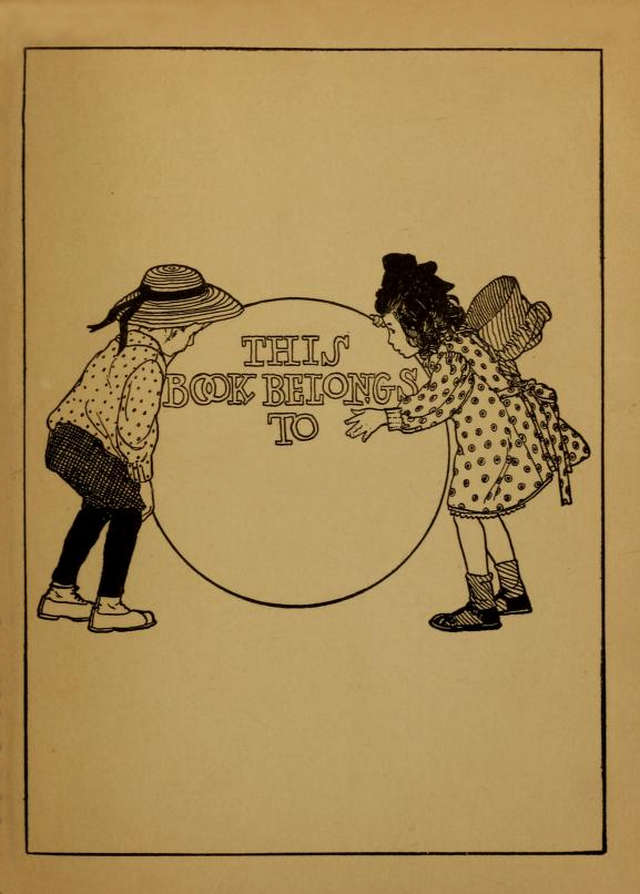 Several black and white decorative pages were also used in the whole series. As you can notice a simple trick with a demand for signature of the book's owner tried to prevent as many second handed sales as possible, aiming to maximizing the publisher's profit as well. 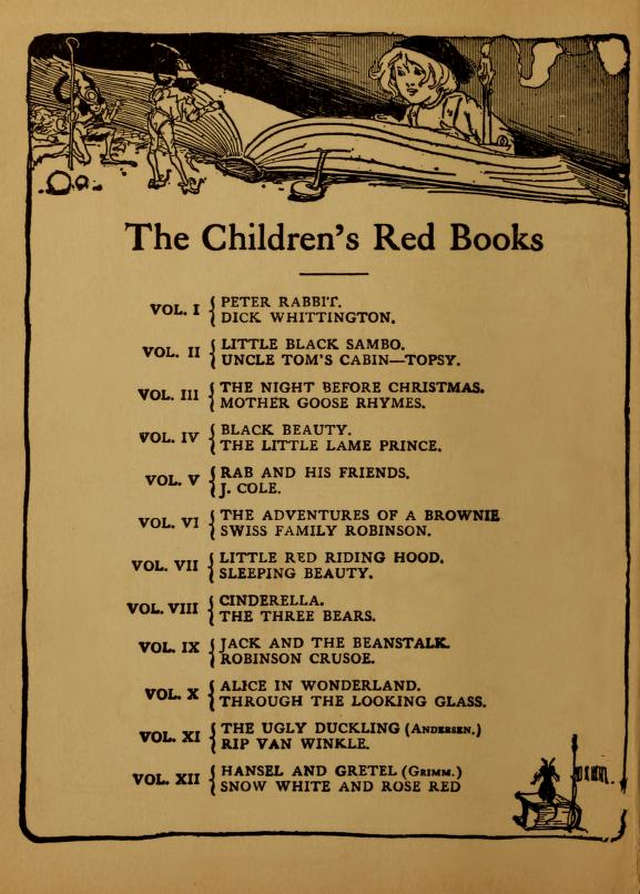 A list of all books published in the series. 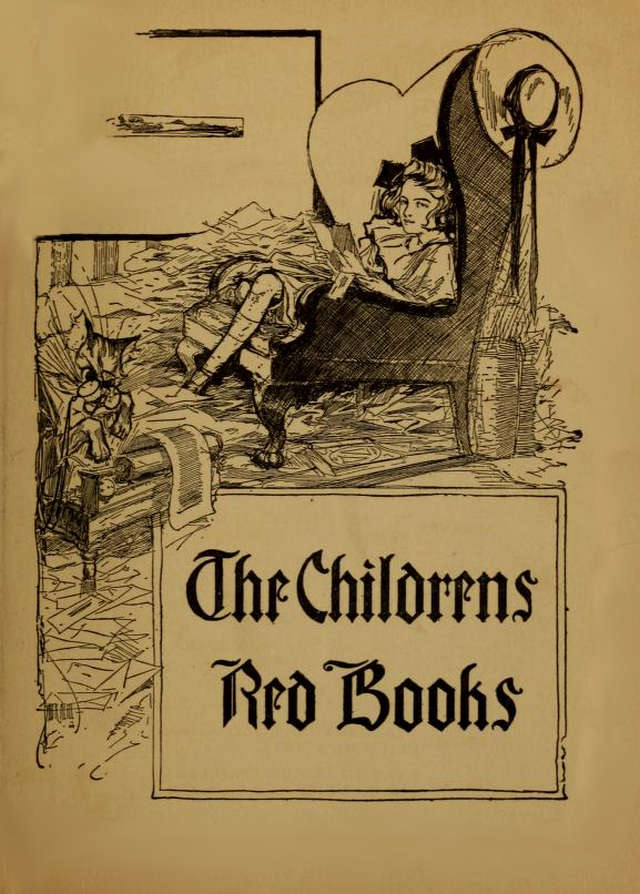 Another generic page unrelated to either of the two stories presented in this particular book. 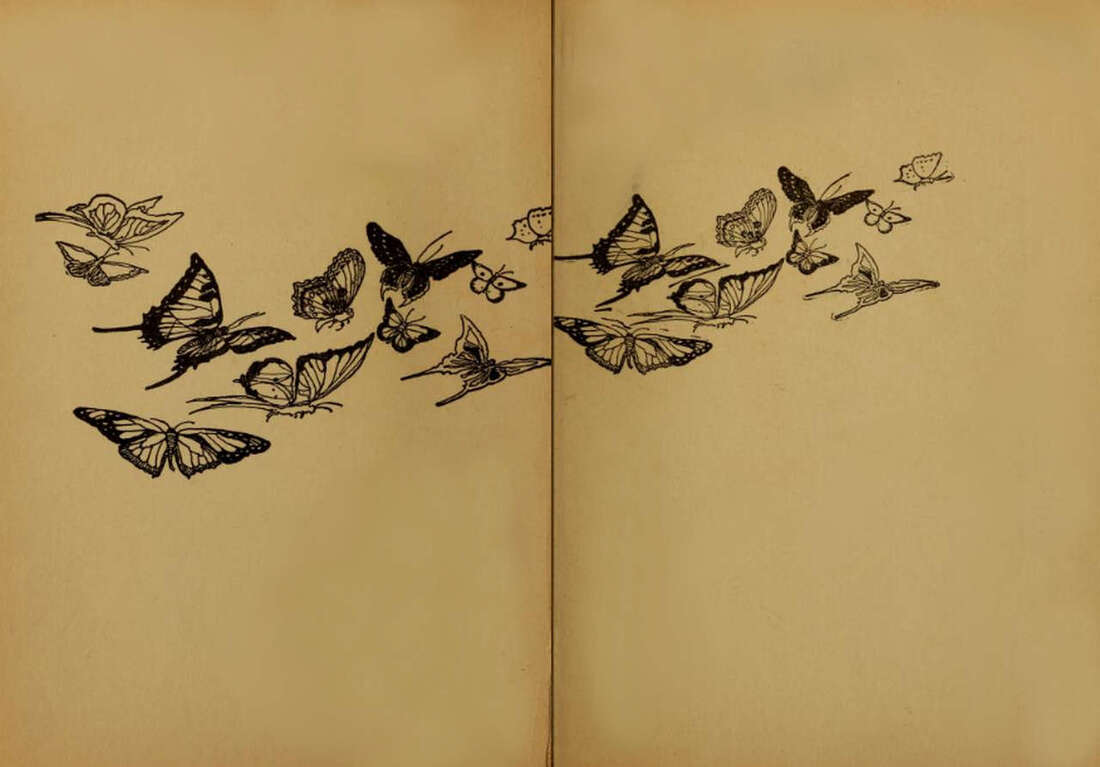 Two more decorative pages as fillers of the volume. 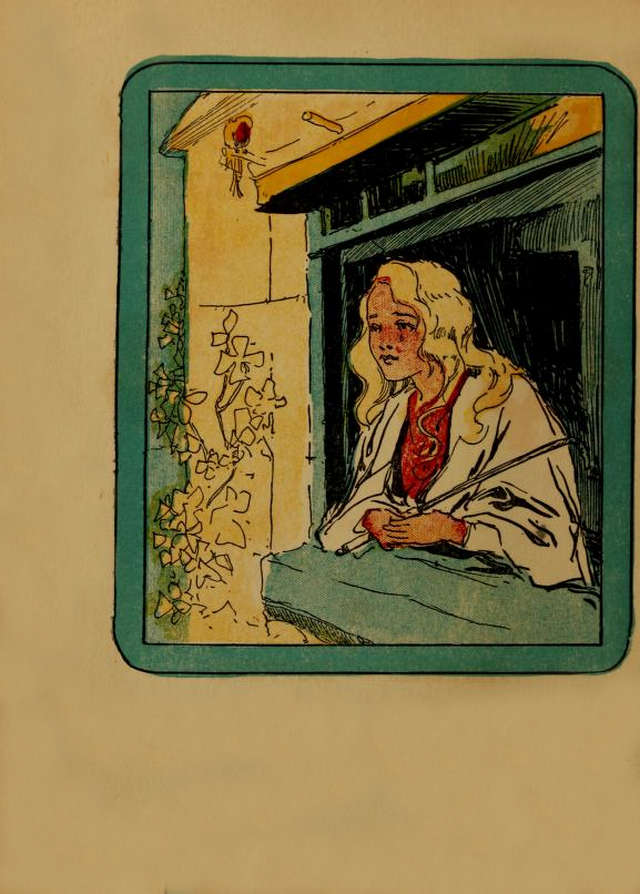 The so-called frontispiece. It presents the scene where Cinderella yearns for the ball. She is home alone, the rest of the family is having fun at the castle.
As you can notice, the illustration was printed on the sheet of paper pretty inaccurately. Black borders are uneven and green color is often outside of borders. Each color was printed separately and sometimes printers didn't wait long enough before printing the next color. There was apparently some problem with binding. The facing pages (in this case the inside title page) often show the silhouettes caused by he fresh paint. Sometimes the color from one side of the color page can be seen on the other page. All such imperfections were edited by me to present as pretty result as possible, but maybe you''ll occasionally still spot some of them.
There were also a lot of smudges everywhere. Most of them are cleared by editing. 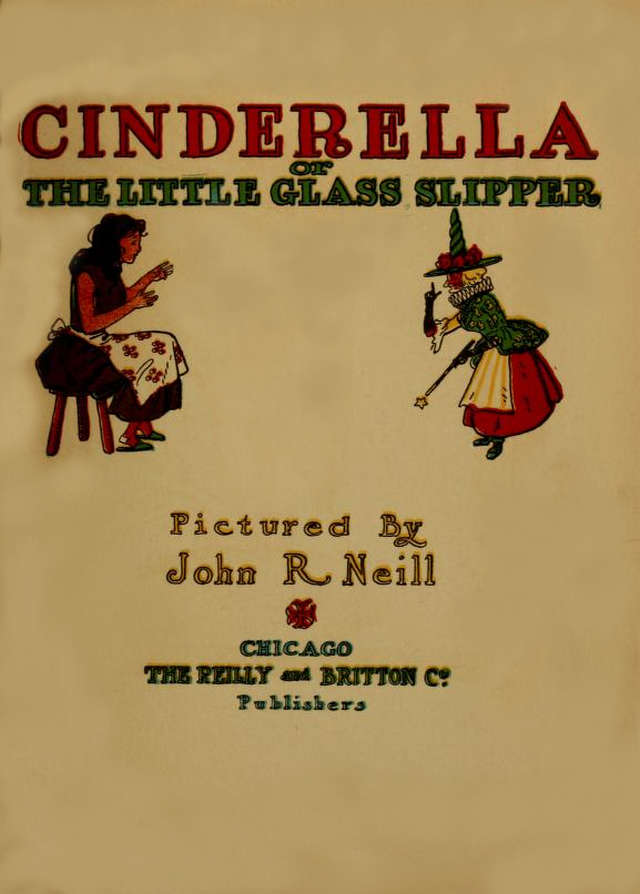 The title page. This is the place where The Cinderella illustrated by John R Neill finally starts. 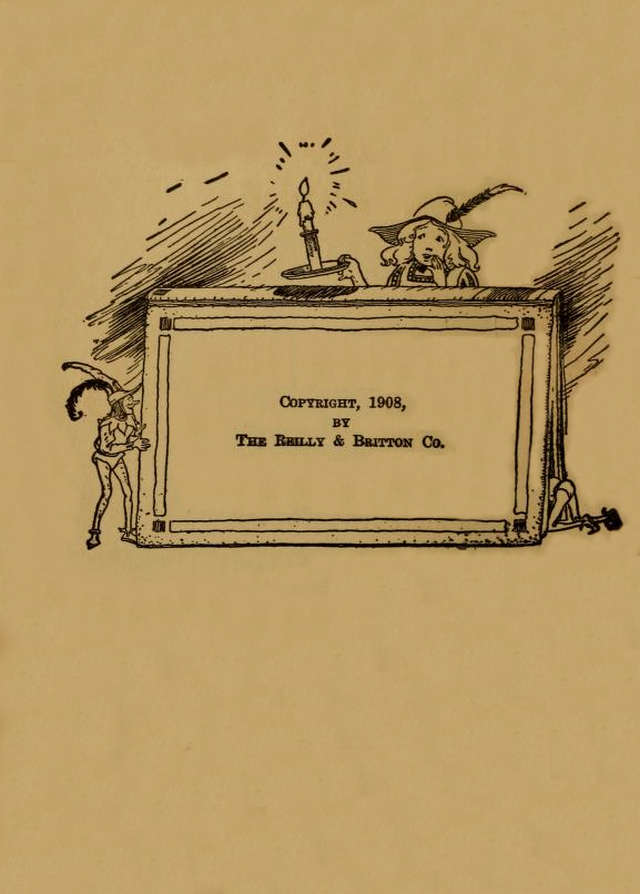 Right after the copyright page. 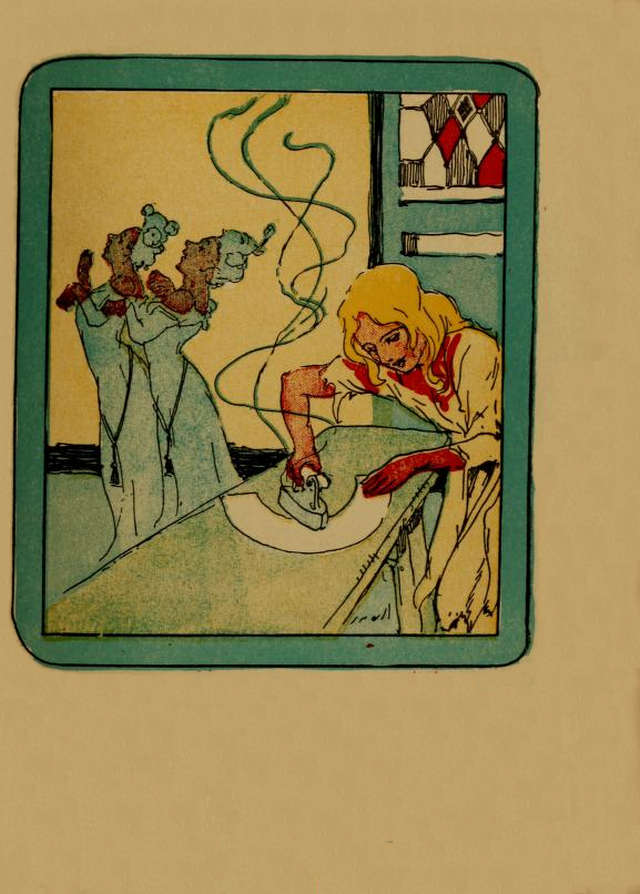 As you can see the illustrator decided to put the story in a bit closer to the present - she is ironing. Her sisters, portrayed as tho of a kind, are not helping. It seems they are enjoying themselves and maybe thinking what chores they can give to the poor Cinderella.
It's also worth mentioning the story starts almost immediately with the ball. The sisters are ready to go and Cinderella must stay at home. Fortunately, her fairy godmother comes by. There's still a chance to participate at the dance! 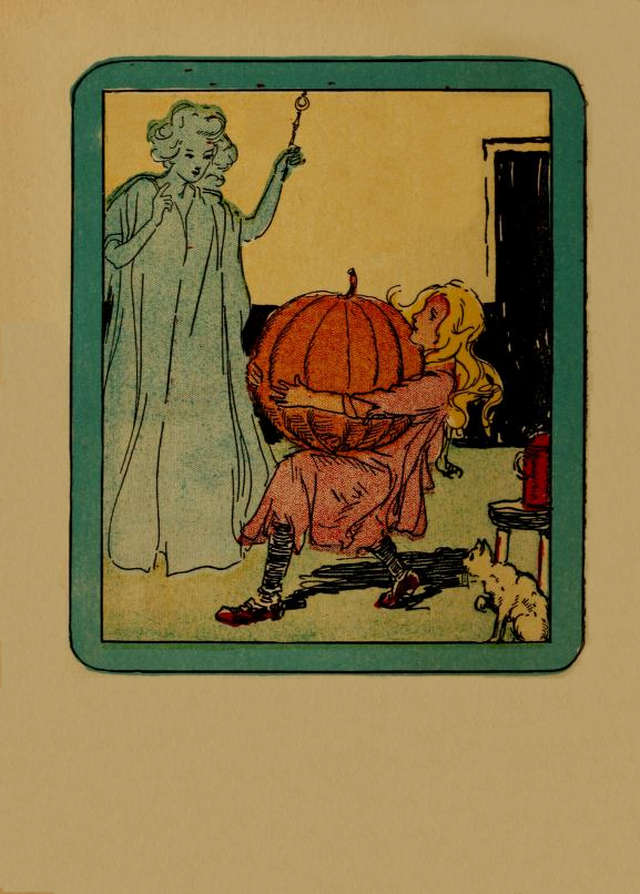 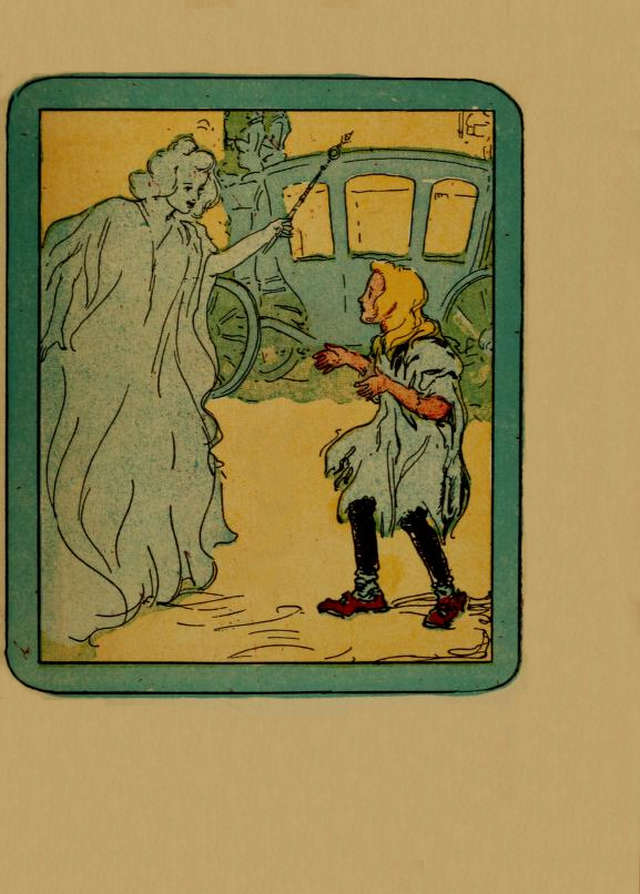 She was transformed in a beautiful princess and the prince had eyes just for her. But she had to return home before midnight. The magic stops at midnight. 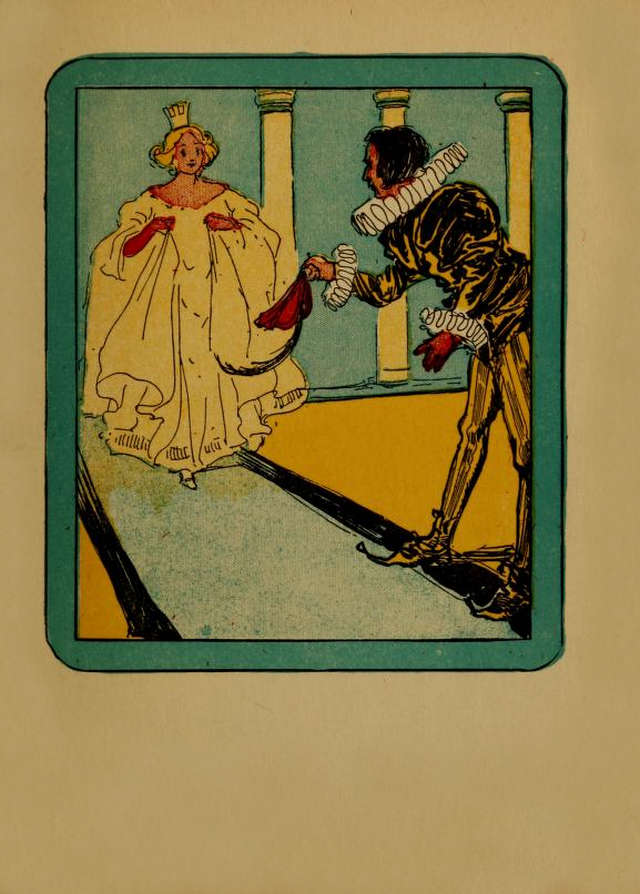 She remembered to get home early enough yet there was another dance in the next evening. This time she almost forgotten. While she was in a hurry to leave the castle, she lost the slipper. 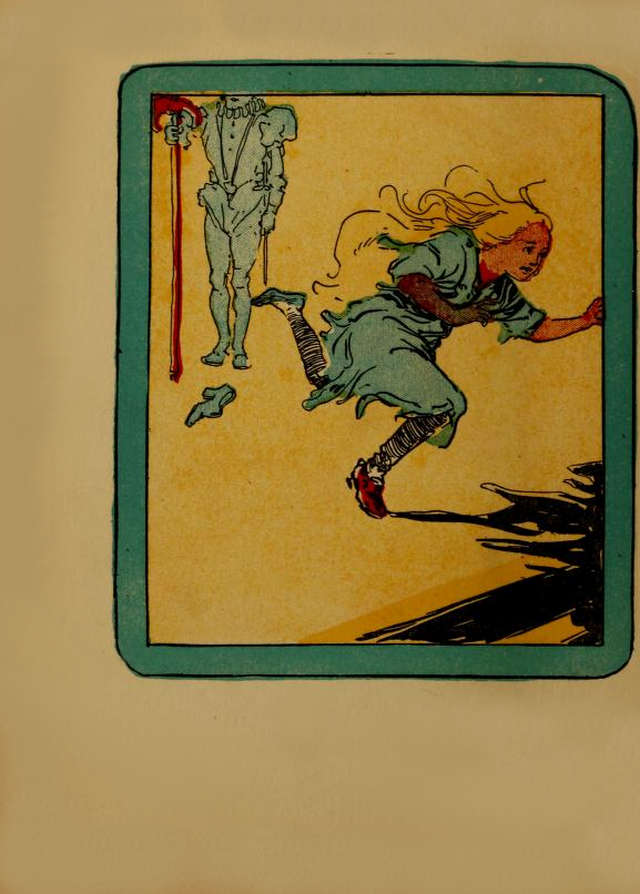 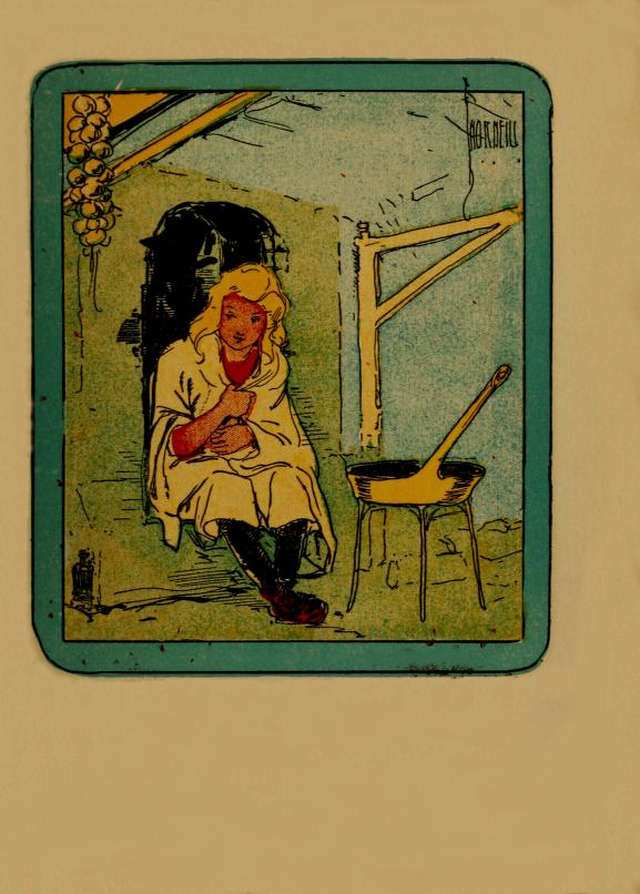 And the glass slipper was the only clue for the prince who still didn't find out who is the mysterious princess.
Well, he knew he wants to marry her. nobody else. If he finds a woman whose foot fits the shoe, she'll become his wife and future queen. 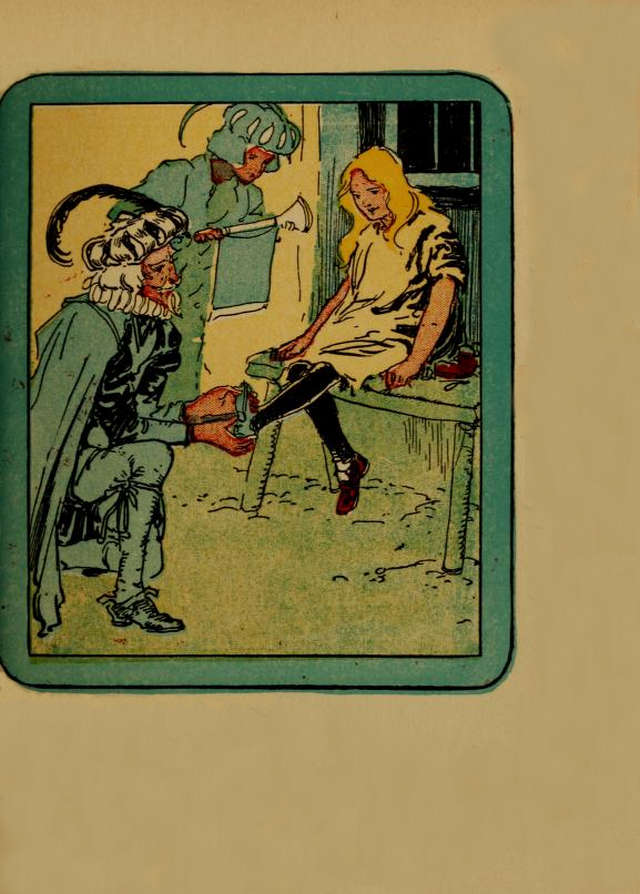 Yes, Cinderella was discovered by the prince and they married. She was so generous she even found husbands for her wicked step-sisters.
As you maybe know, this was the Charles Perrault's version of Cinderella, the first with the glass slippers. A bit later another version by Brothers Grimm came into print - there were golden slippers and revengeful birds who punished the sisters, but this version is much less popular. 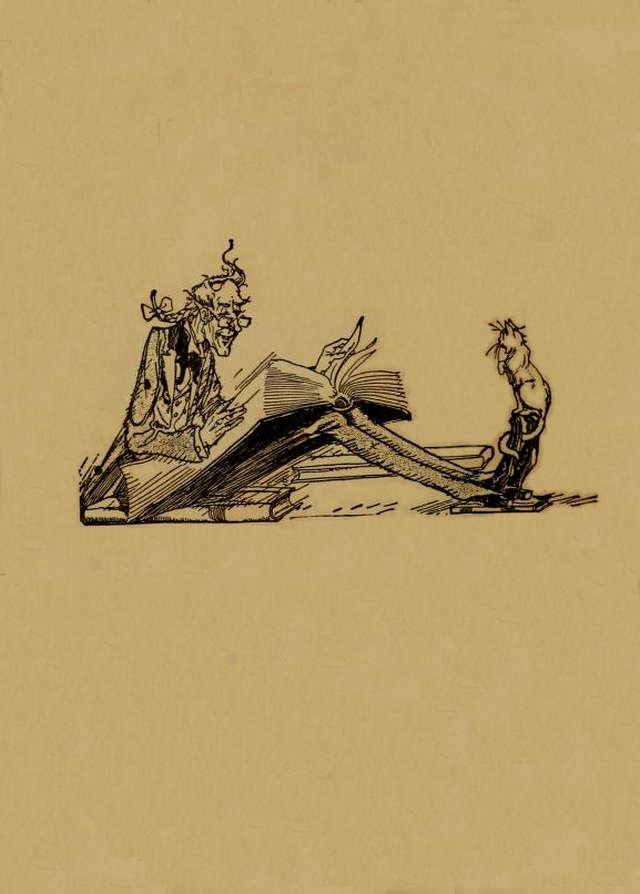 Yes, it's time for the other of the stories in the book - The Three Bears. 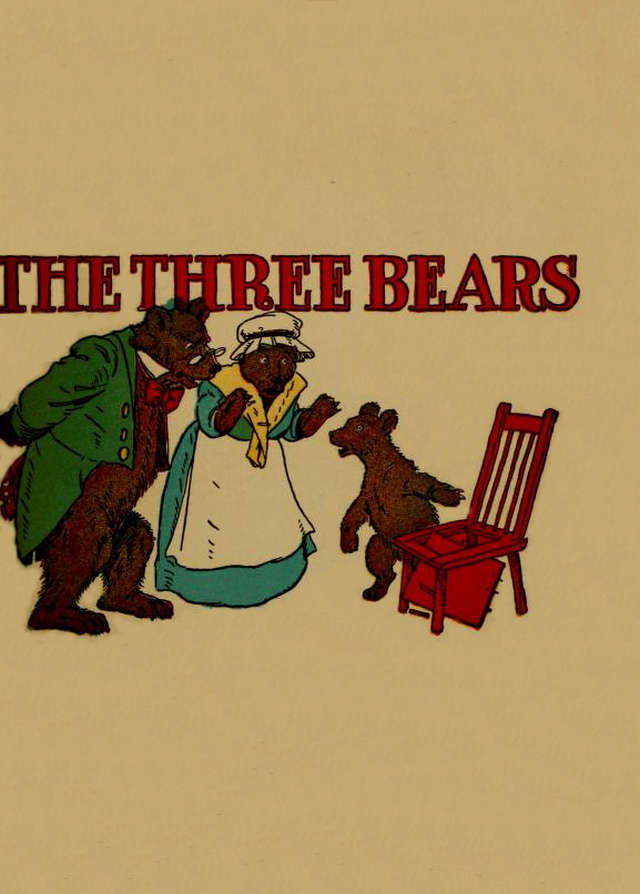 After the inside title page another copyright notice follows. 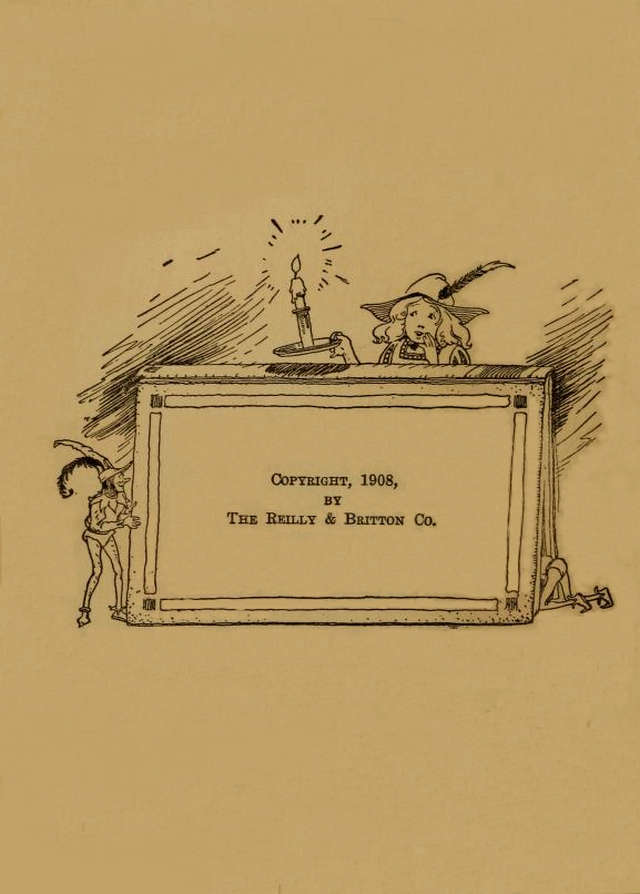 There were three bears living in the house in the wood. They were Big Bear, middle-Sized Bear and Tiny Bear, what is probably a slight surprise for majority of readers today because we are more familiar with a modern version (with different title - The Goldilocks), where the bears are presented as a family with a father, mother and a son. 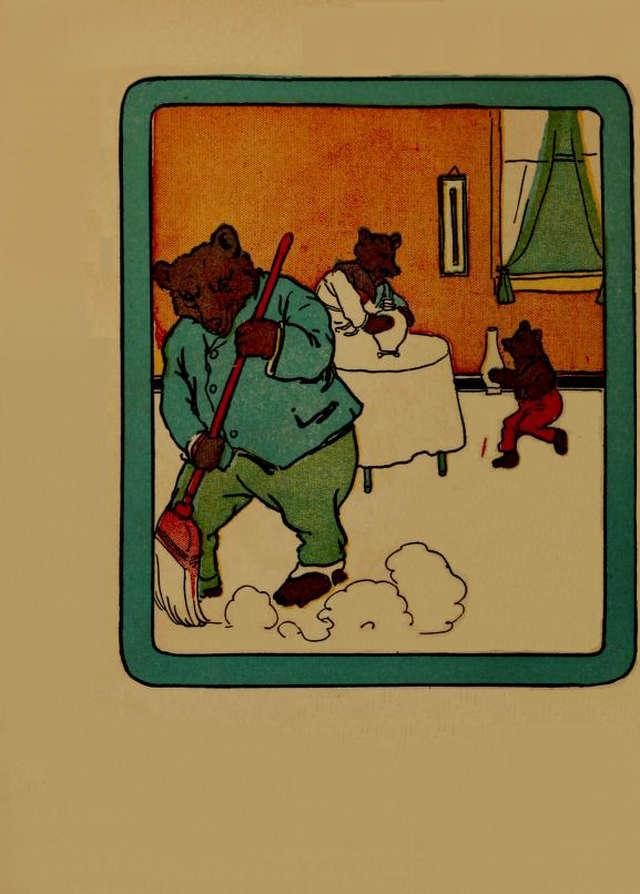 One day they intended to have some porridge for lunch. It was so hot they decided to take a walk before the lunch and the porridge can cool in the meantime. 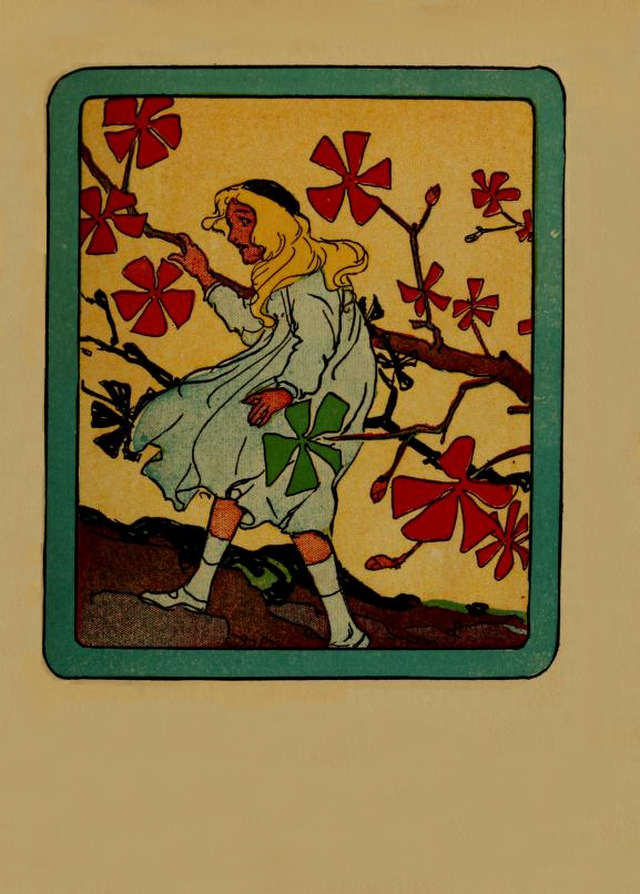 There was a girl who was a walking in the wood at the same time. She had golden hair and she was called Goldilocks. 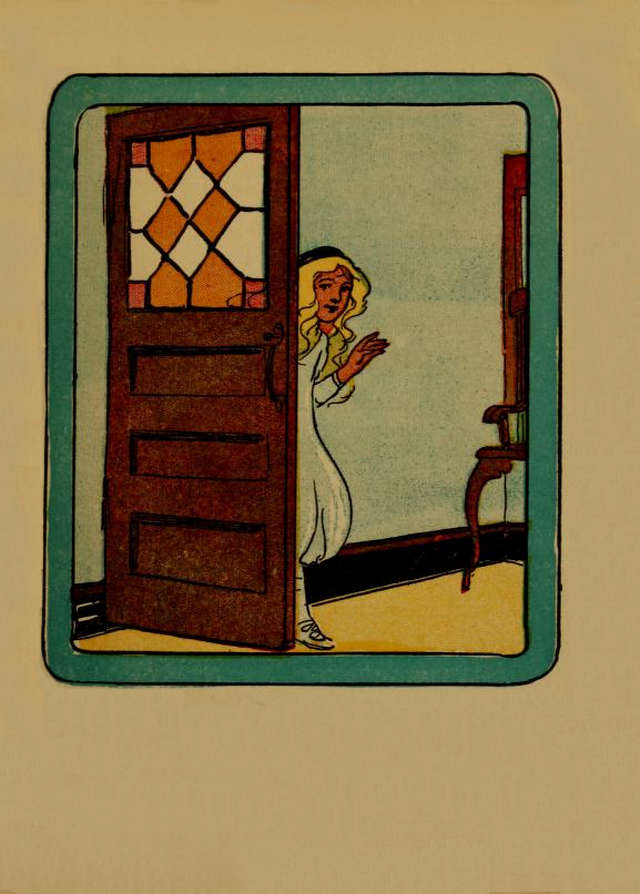 Goldilocks reached the house of the bears. The doors were not locked and she entered. 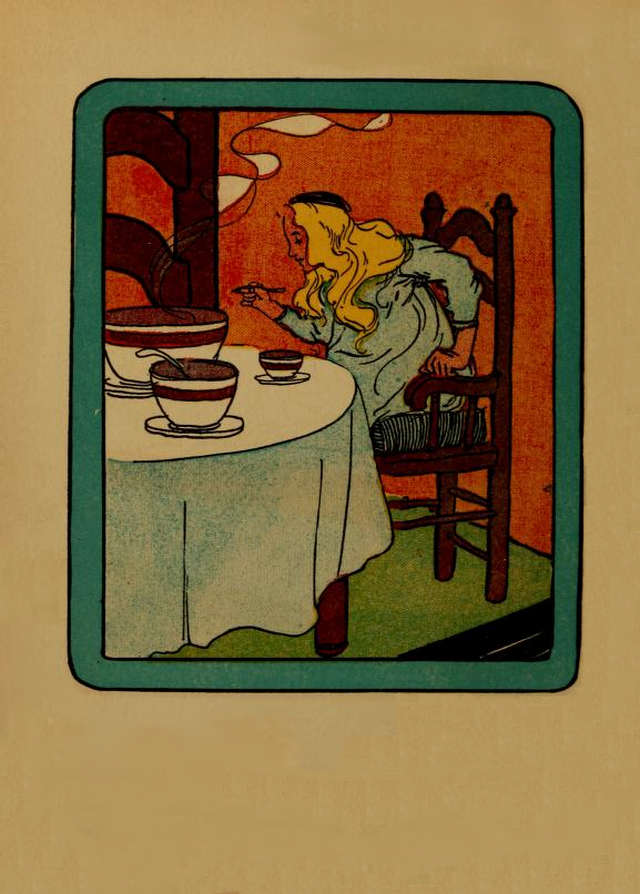 She found some porridge on the table. She tried it from all plates before she settled at the last one.
She tried all the chairs before she decided the smallest was just perfect for her. And after that she tried the beds. Again, it was the tiniest, the one belonging to the the smallest of the bears she was most comfortable with. Enough to fall asleep in it. 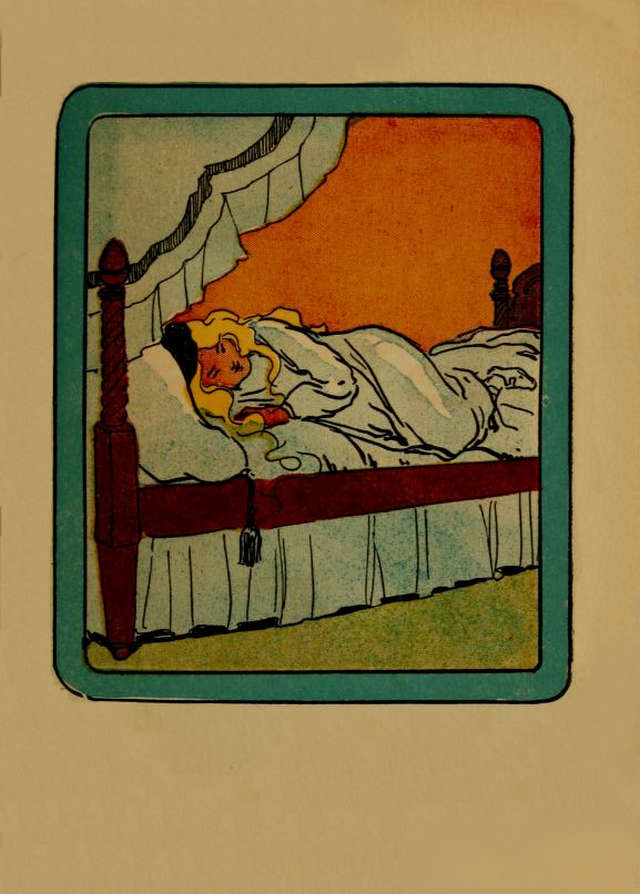 Soon after that the bears returned home. 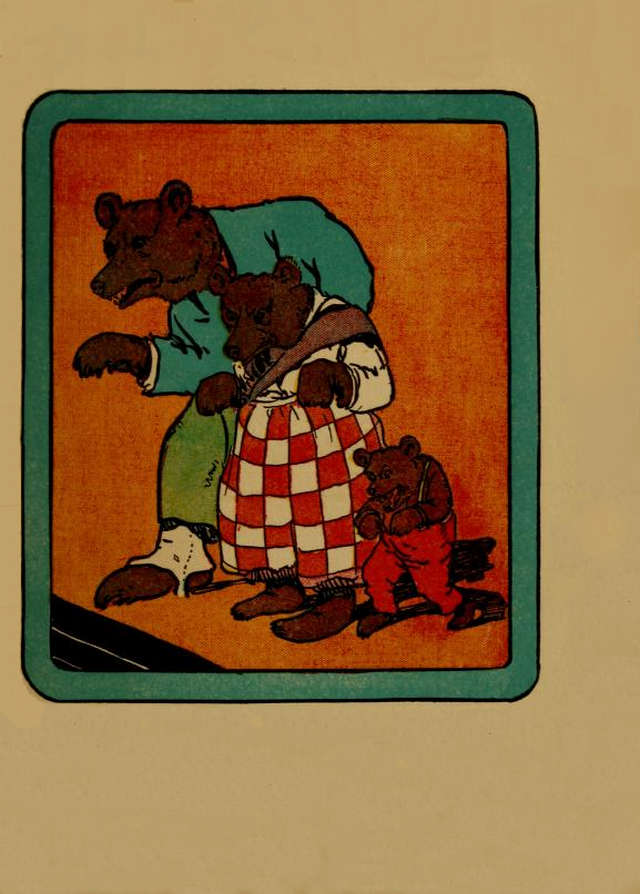 Of course they noticed somebody was eating their food and sitting in their chairs. 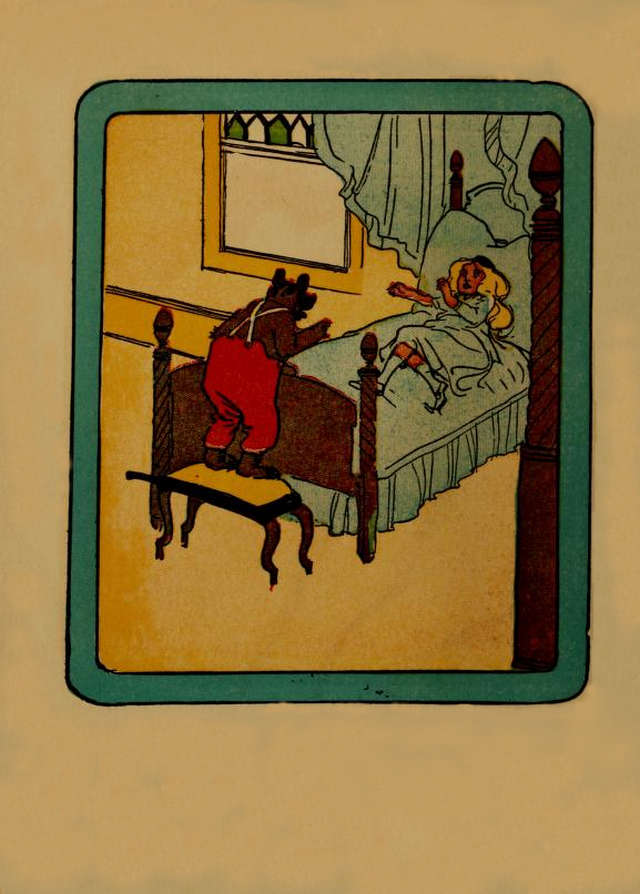 Tiny Wee Bear was particularly angry when he found a girl sleeping in his bed. Then she woke up and saw three bears staring at her. 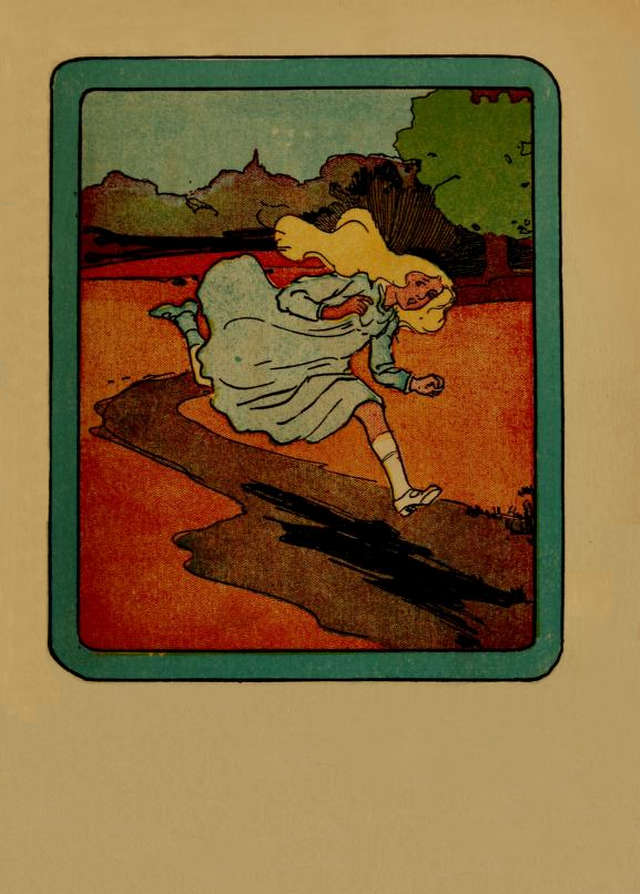 She never returned and the bears ate their porridge without distraction for the rest of her lives. 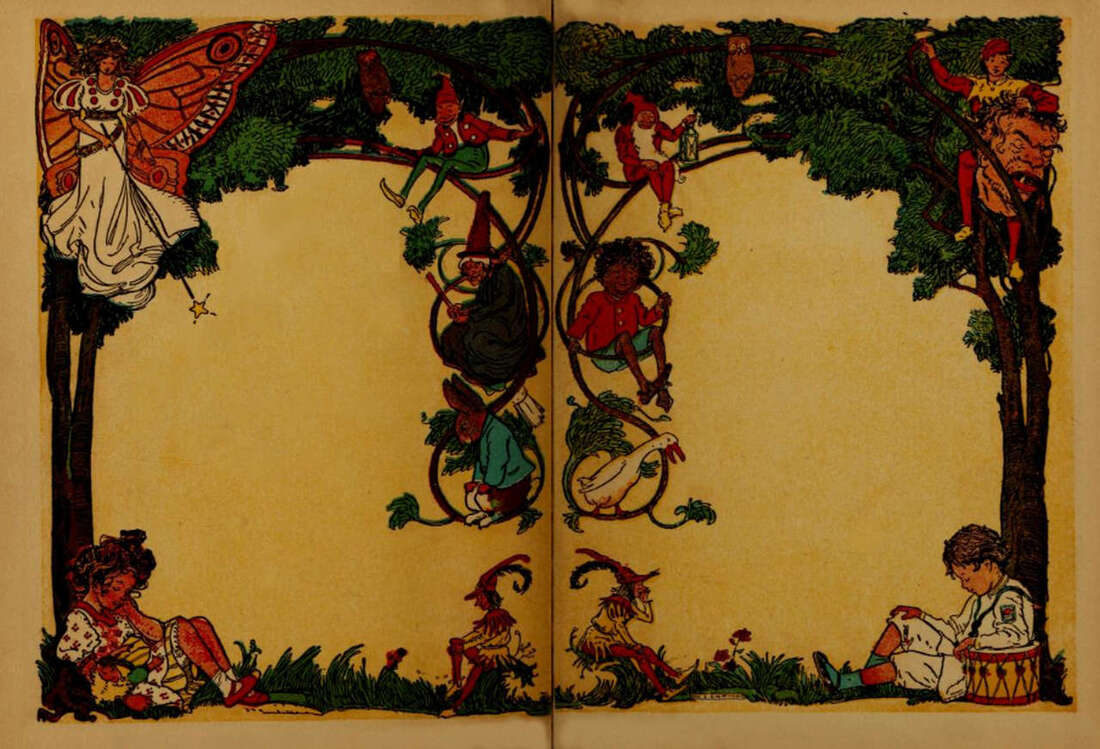 The book Cinderella, or, The Little Glass Slipper, illustrated by John R. Neill was published by Reilly and Briton Co., Chicago in 1908.