Tsarevich Ivan, the Firebird, and the Gray Wolf 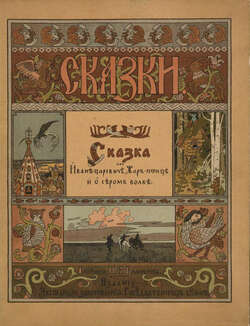 ​Once upon a time, there was a Tsar Vyslav who had three sons: Dimitry, Vasily, and Ivan. He also had a beautiful garden with all sorts of trees. His most precious tree bore golden apples but a Firebird started to visit it and stole almost all apples. 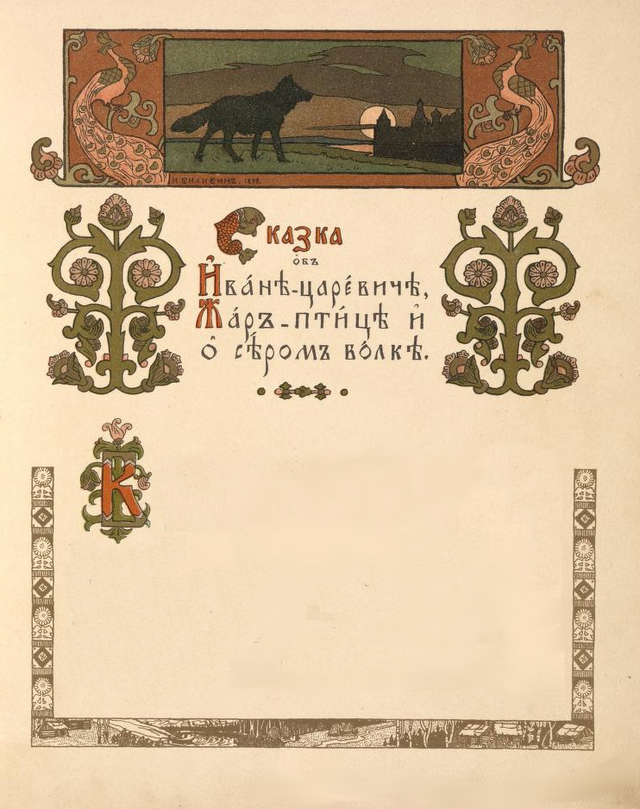 ​King was very annoyed and promised half of the kingdom to whichever of his sons can catch the bird. The other half goes to the same son after the king's death. Dimitry tried first but falls asleep. Same happens with Vasily the second night. The youngest, Ivan, however, manages to stay awake and grabs the bird. Unfortunately the bird escapes and only one of its feathers stay in his hand. 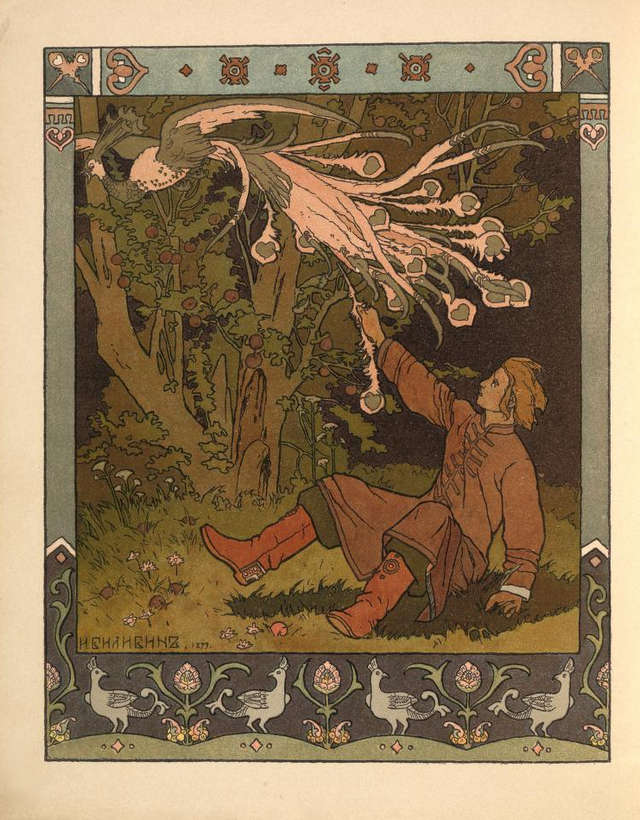 When the king saw the shiny feather wanted the bird even more. When the Firebird stops visiting his garden all three Tsareviches rode away. The elder ones went together and Ivan parted alone. After a while, he got to crossroads. There was a sign. One way promised him to be hungry and cold, other he'll be all right but his horse will die and the last one his horse will be o.k, but he will die. 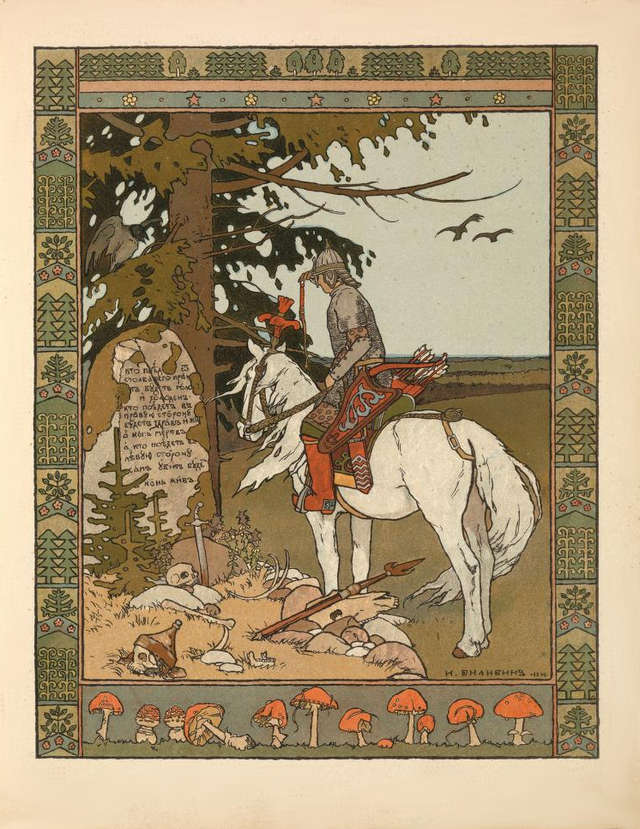 Ivan decided to go where he would be fine, even if had to find another horse later. Soon a grey wolf appeared and told him he was warned. Then he ate a horse. Tsarevich Ivan was sad but he met a horse next day and wolf offered him he may ride on his back. Ivan told him about the Firebird. The wold now only led him to the bird but told him how he can get him. He specifically warned him not to take the cage.

Ivan couldn't resist and took the bird and the cage. He was caught by soldiers who took him in front of Tsar Dolmat. Dolmat decided he will not punish Ivan for stealing if he brings him a horse with a golden mane. 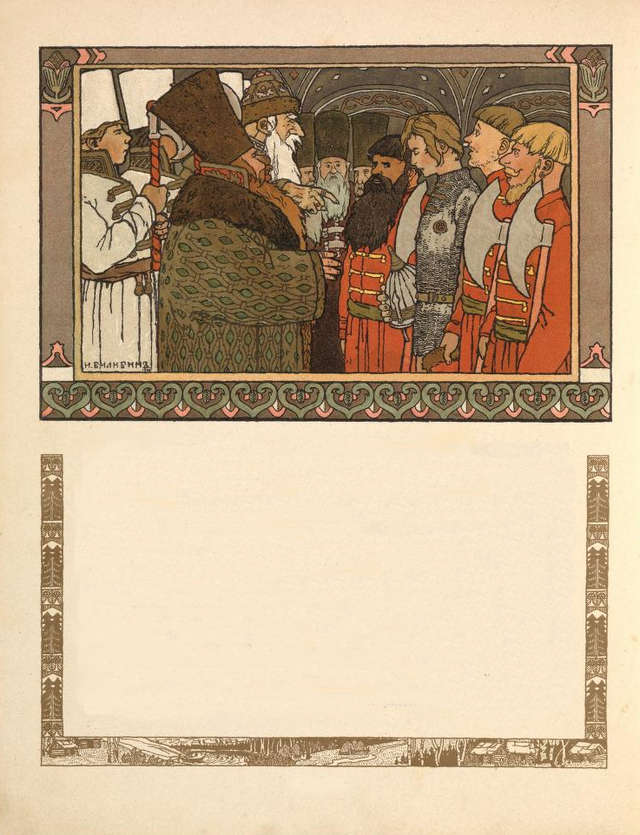 ​Wolf helped Ivan one more time. He told him how he can get a horse and specifically warned him not to take the horse's bridle. Ivan again couldn't resist and took the horse and the bridle. He was caught by a soldier who took him in front of Tsar Afron. Afron decided not to punish Ivan for stealing if he brings him, Princess Elena.

Wolf helped Ivan to get the princess. This time Ivan was not caught but he fell in love with the princess. She liked him too. So Ivan asked wolf how he can keep the princess and still got the horse which he needs in exchange for the Firebird.

Wolf changed himself in a princess, Ivan got the horse and with the real Princess Elena left the kingdom of Tsar Afron. Later wolf changed back and caught Ivan. But Ivan wanted to keep the horse too. How can he do that and get the Firebird at the same time?

But Ivan and his princess felt asleep and his two older brothers found him under a tree, with a beautiful princess, great horse, and the Firebird. They cut him to pieces, grabbed his possessions and brought the princess to the kingdom of Tsar Vyslav under a threat of killing her if she tells the truth.

Later the gray wolf found the body of Tsarevich Ivan just when ravens started eating Ivan's body. The wolf immediately tore one of the raven's kids and forced the old raven to bring him the water of life. Then he restored little raven and Ivan. The wold and Tsarevich Ivan returned to Vyslav's kingdom right after the feast of his brother Vasily married Elena. 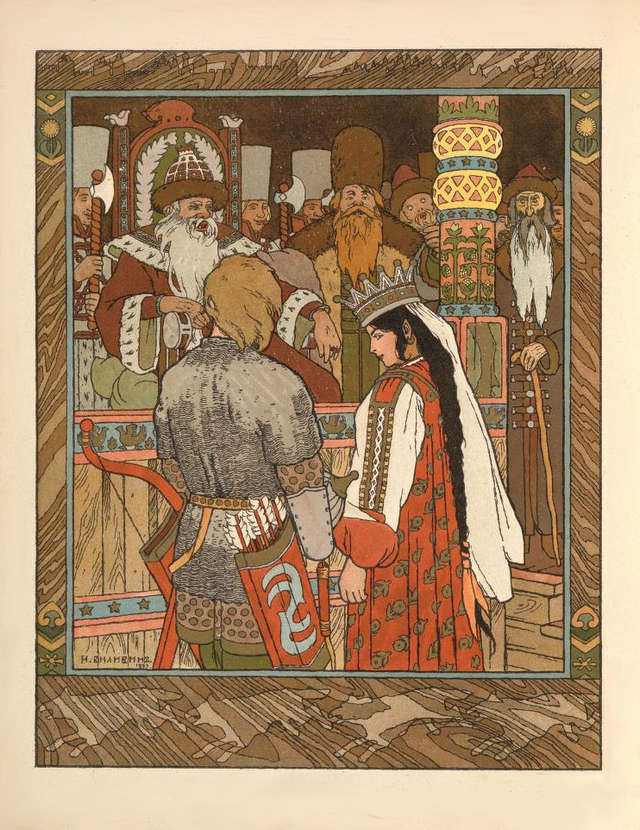 This book, a retelling of Russian fairy tale, was published in 1901 in Sankt Petersburg. Text (not presented in our case) was printed in Cyrillic. Decorative borders are done by Ivan Bilibin as well. Whole book is in Public Domain. 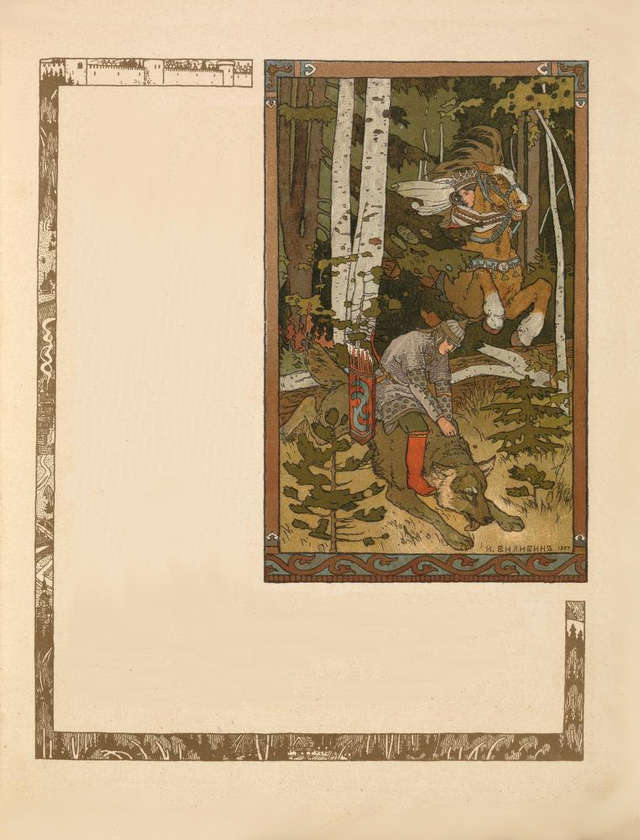 As you may notice this text is very similar to Golden Bird by Brothers Grimm, but simplified a bit: 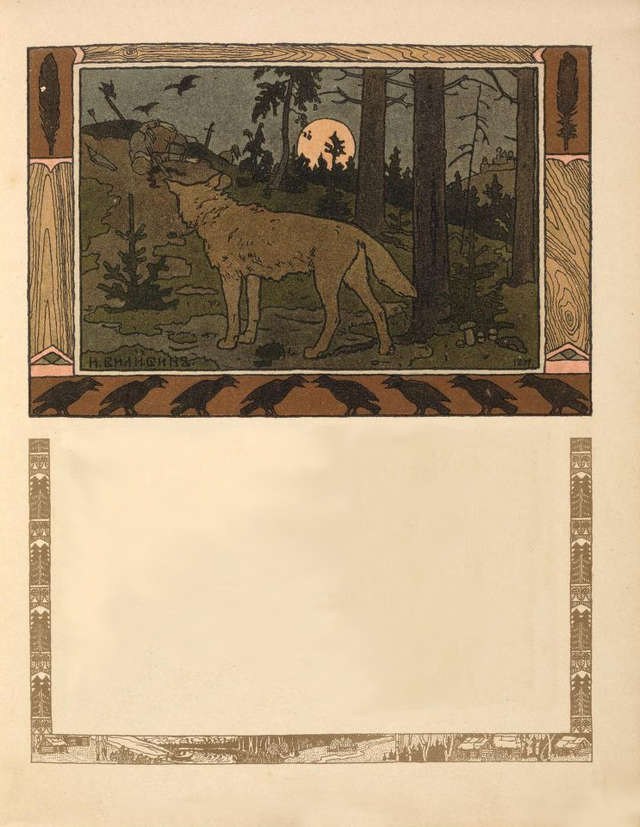 This fairy tale was published in several collections and compilations of Russian fairy tales. The title may vary. Firebird, for instance, is sometimes named Zhar ptica, or even Phoenix. Tsarevich and wolf are often omitted from the title. 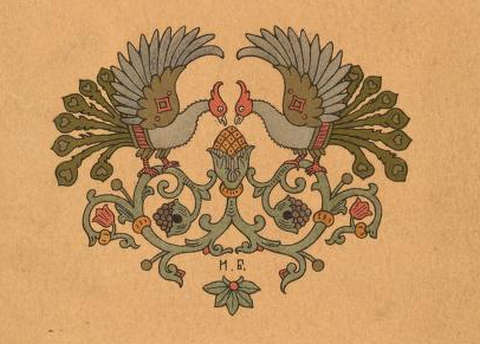